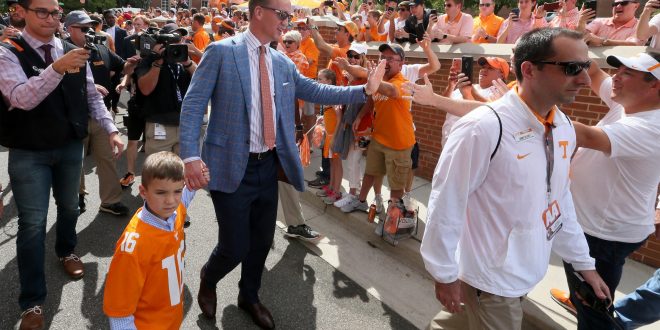 Is Peyton Manning In The Running To Be The Next Tennessee Head Coach?

There are few people more popular around Knoxville, Tennessee than Peyton Manning. Despite never beating the Gators, Manning threw for over 11,000 yards, 89 touchdowns and only 33 interceptions while at UT. He won the Maxwell Award in 1997 and was named to the Tennessee Athletics Hall of Fame in 2016 and the College Football Hall of Fame in 2017.

Peyton Manning: "It's been a difficult time but I know what Tennessee is capable of being."

While Peyton Manning has said that he will strongly back whoever the next Tennessee head coach is, it’s unlikely to be him. Peyton’s father and former NFL quarterback, Archie Manning, said in an interview that he doesn’t think his son will be the next head man in Knoxville.

Former Tennessee quarterback Peyton Manning on the Vols' coach search: "I've been a devout supporter and always will be and look forward to hopefully getting it back to where it was back when I was in school. Great place." https://t.co/7d5OQ5MJ3t

As is the case with any major coaching search nowadays, Jon Gruden’s name has been floated around as an option for the job. Unfortunately for Volunteer fans, Gruden is about as unlikely to be the next Tennessee head coach as Manning is. NFL fans can rejoice as Gruden, more likely than not, will remain in the Monday Night Football booth.

Hours it took for UCF to hire a head coach: 68. Running clock on Tennessee: 545 hours.

Previous Oklahoma City Thunder Having More Success in December
Next No. 5 Florida Looks To Bounce Back On Wednesday Night vs. Loyola-Chicago