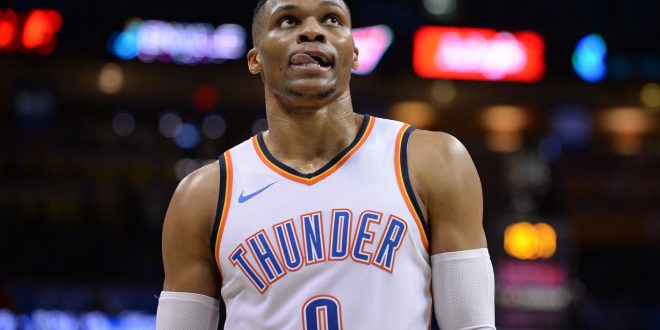 After a rough start for Oklahoma City, the Thunder had an impressive home stand to kick off December. First defeating the Timberwolves on the 1st of the month, OKC went on to beat the 16-8 San Antonio Spurs on the 3rd and the Utah Jazz on Tuesday.

So far this month, things are looking up for OKC. Thunder Head Coach Billy Donovan was proud of his team and their performance Tuesday that finally lived up to this season’s expectations. Donovan commented,

“We played hurried, we played rushed, we played like we were down by 20 points with five minutes to go in the game. That’s how we played the first half.”

Donovan went on to praise the team’s defense against Jazz, saying, “once we understood that we needed to keep our composure and generate good shots without question from start to finish, I think our defense gave us a shot tonight.”

The Thunder before December

Fans had high hopes for OKC coming into the 2017-18 season with Paul George and Carmelo Anthony newly on the roster. George, Anthony and returning hero Russell Westbrook make for an exciting trio and expected to be unstoppable this season; however, after a season starting blowout victory and home opener against the Knicks, things quickly turned south for the Thunder. The games that followed saw two close games that ended in Thunder defeat. Since then, the Thunder have fought and failed to lift themselves out of their losing record.

Individually, George, Anthony and Westbrook all have impressive statistics. Anthony is averaging 18.5 points per game, while George averages 20.7. As always Russell Westbrook excels in a

Still the Thunder have not been able to come out on top in a majority of their regular season games. It’s the road trips that give OKC trouble. At home, the Thunder boast a 9-3 record, while their away record sits at 2-9.

In the beginning of the season, each loss for the Thunder was a close one. Anthony says this pattern makes it even more aggravating for the team, commenting, “it’s frustrating… understanding what we have, the talent that we have here and not being able to put it together right now.”

The Thunder are now 11-12 and hope to quickly pull out of their rut for a successful season moving forward. Looking ahead, OKC will go on the road again to take on the Brooklyn Nets Thursday at 7:00p.m.

I grew up in the Washington, DC area and now I'm a Gator. I'll always be learning more about myself, others and the world around me. And I'll always be talking about sports.
@kelsey_godman
Previous Gator Legend Steve Spurrier Enters Hall Of Fame As A Head Coach
Next Is Peyton Manning In The Running To Be The Next Tennessee Head Coach?