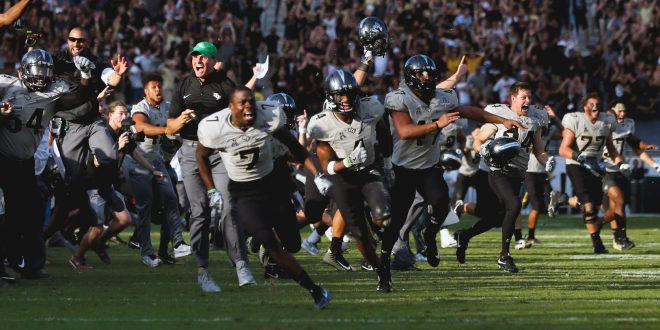 The University of Central Florida Knights (12-0) has emerged as one of this year’s Cinderella teams in college football. From a team unable to find a win two years ago too an undefeated team, the UCF Knights became the first team in FBS history to accomplish a complete program turnaround in that short of time.  With a win over Memphis to become the American Athletic Conference champion, UCF earned a New Years Six bowl bid to the Peach Bowl.  The Knights last big bowl game came in 2013, last year of the BCS era, as they upset sixth ranked Baylor 52-42 in the Fiesta Bowl.  Unfortunately for UCF, their coach, Scott Frost, accepted his dream job to become the coach at his alma mater, Nebraska on December 2nd.  With a big gap to fill in Frost’s absence, the UCF Knights have hired Missouri offensive coordinator Josh Heupel to take the reigns.

Heupel began his coaching career 14 years ago as a Graduate Assistant at Oklahoma under Bob Stoops.  With an offensive mindset, Heupel has spent his last two seasons as Missouri’s Offensive Coordinator/QB Coach.  Under Heupel’s direction, the Missouri Tigers lead the SEC averaging over 39 points per game.  In addition, Heupel has improved Missouri quarterback Drew Locke’s play aiding him to achieve First Team All-SEC recognition.

The Knights currently lead the nation in scoring averaging over 49.4 points per game. If no one leaves early for the NFL Draft, Heupel will inherit 10 current offensive starters. This could lead to even more offensive success as the Knights aim for back-to-back American Athletic Conference titles. However, this season is not quite over yet as the Knights will look for a win against Auburn in the Peach Bowl.  It is expected that Frost will coach the team in that game.