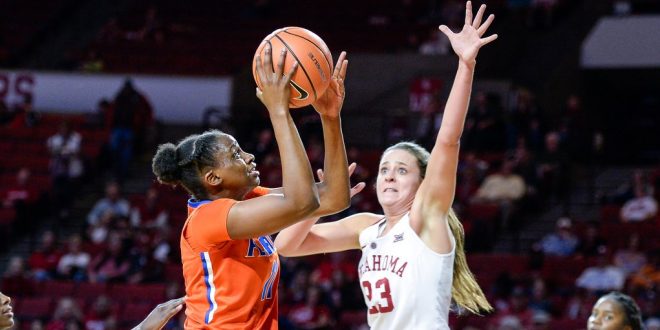 The Florida women’s basketball team was close to perfect in Norman, Oklahoma on Sunday. The threes were flying, the Sooner stars were shut down, and the Gators dominated on the boards.  Another outing like the one on Sunday will greatly help as the team hosts one of the most talented teams in the country, Ohio State on Wednesday. The Buckeyes come into Gainesville boasting a top 15 ranking. The Gators have been riding high the last three games and are ready to be put to the test.

After games this season, the Gators have shown to focus on themselves following wins and losses and correct any mistakes. There weren’t many mistakes that hindered the Gators in Oklahoma.  Gator head coach Cam Newbauer says that their success on Sunday came from the team sticking to the game plan.Fueling Sunday’s win was a career performance from senior guard Dee Anderson. Anderson had a career high 29 points. Anderson says her strong performance is due in large part to her teammates.

On Sunday, the Gators got their first signature win of the season. They also won their third game in a row. When they return to the court Wednesday, the Gators will look for another signature win when they take the court at the O’Connell Center as they face off with Ohio State. Coming into Gainesville, the Buckeyes are winners of four out of their last five. The last win coming in an 83-70 win over Maine on Sunday. Ohio State boasts a guard-forward tandem in Kelsey Mitchell and Stephanie Mavunga that prove to be dangerous for opponents. Coach Newbauer knows that slowing those two players down could be the difference in Wednesday’s game.

Senior Buckeyes guard Kelsey Mitchell is one of the best players in the country. Mitchell is leading the Buckeyes with an average of 25.7 points per game. The Gator guards have a tough task trying to slow her down. However, it iss something they know can be done; Florida completely shut down star Sooners guard Gabbi Oritz Sunday afternoon. They were able to make Oritz a non-factor by limiting her touches. Junior guard Funda Nakksoglu says the team will try to duplicate that strategy against Mitchell and hope for a similar result.

The Buckeyes will be the highest ranked team that the Gators have seen this season. The last time the Gators faced a ranked team it was against Florida State, who was ranked 17th in the country.   The outcome wasn’t one the Gators wanted, losing the game by a record margin of 30 points. As one of the team’s leaders, Dee Anderson says that the young players shouldn’t be intimidated when they see the scarlet and gray jerseys for Ohio State. The Gators are major underdogs heading into their battle with the Buckeyes but Nakksoglu thinks the team can thrive in that role.