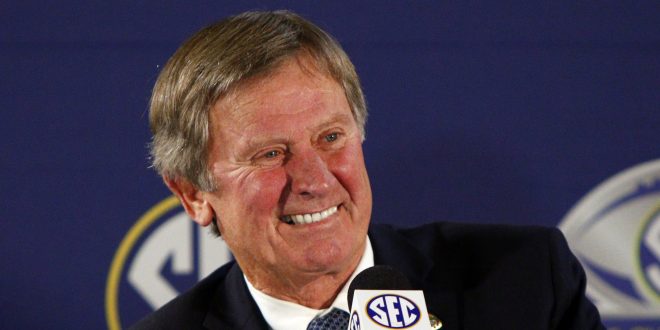 The accolades just keep on coming for Florida Gator legend Steve Spurrier. Spurrier was inducted into the College Football Hall of Fame Tuesday night. He was inducted for his work as the head coach for Duke, Florida, and South Carolina.

"I really appreciate going into the Hall of Fame. I'm able to join my college coach, Ray Graves, who's in the Hall of Fame. And the coach who gave me my first coaching job, Doug Dickey." — @SteveSpurrierUF #GoGators #GatorsAlways pic.twitter.com/yKxJDx57jN

Gator fans understand how unique Spurrier’s legacy is in college football. Winning a Heisman as the Gator quarterback and then coaching his alma matter to a national championship is something not many people can say. Not many people can say they have been inducted in the hall of fame twice. Spurrier can say he has. On Tuesday, Spurrier became the fourth person to be inducted as both a player and a coach. The Head Ball Coach joins the ranks of Amos Alonzo Stagg, Bobby Dodd, and Bowden Wyatt.

Spurrier spent 26 seasons as the head coach for three different schools. He brought Duke, Florida and South Carolina to the national spotlight while he was head coach. Spurrier’s resume as a head coach is nothing more than impressive. However, it was Spurrier’s job at Florida that made him a Hall of Fame coach. As the head coach of the Gators, Spurrier won six SEC championships, five SEC Coach of the Year Awards, and the national championship in 1996. Spurrier was also the first Heisman trophy winner to coach a Heisman trophy winner in Danny Wuerffel. Not to mention Spurrier constructed Duke and South Carolina to be programs to be reckoned with on a national level.

Gainesville native Adrian Peterson was among the legends to be inducted into the College Football Hall of Fame. After being an MVP for Santa Fe High School, Peterson would go on to play at Georgia Southern where he had similar success. Peterson broke several NCAA Division II rushing records at Georgia Southern. He was the first sophomore to win the Walter Payton Award, given to the most valuable player in Division II. Peterson could’ve won the award multiple times, being that he finished in the top three vote getters for the award all four years in college. Other players of note who got enshrined include Marshall Faulk (San Diego State), Matt Leinart (USC), Brian Urlacher (New Mexico), and Danny Ford (Clemson and Arkansas).