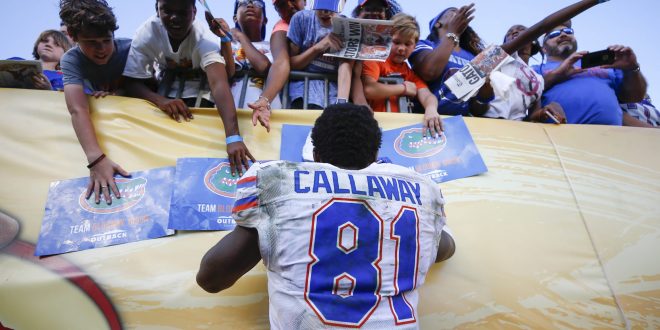 After missing his junior season due to an indefinite suspension, reports say that Florida Gators receiver Antonio Callaway has signed with agent Mel Bratton and will enter the 2018 NFL draft.

During the 2015 and 2016 seasons, Antonio Callaway was the Gators leading receiver. The 5-11, 197 lb receiver racked up two great seasons in a row. In 2015, Callaway had 35 receptions for 678 yards and four touchdowns. In 2016, Callaway caught 54 passes for 721 yards and three touchdowns. He also had two touchdowns on punt returns and one touchdown on a kickoff return.

In December 2015, Callaway was the subject of a Title IX investigation but was cleared of any wrongdoing. During the investigation, Callaway said that he was “so stoned I had no interest in having sex with anyone.” In May 2017, Callaway was charged with misdemeanor marijuana possession. He pleaded no contest to a lesser charge of possession of drug paraphernalia. Ahead of the 2017 season, it was discovered that Callaway and 8 of his teammates committed credit card fraud. Callaway added almost 2000 dollars to his bank account and used the money to buy himself a new computer and headphones. He was one of seven players who accepted a pre-trial agreement that would see the charges dropped if he completed a 12-month probation program. Callaway was suspended for the entire 2017 season.

Callaway as a prospect

There is no denying Antonio Callaway’s talent. He has shown that he is an electric playmaker with great hands and great speed. While some scouts might even say that Callaway has first-round talent, his off-the-field issues will hurt his draft stock. NFL teams will be wary of a player with several legal issues and the fact that Callaway missed the entire 2017 season certainly won’t help him. Still, Callaway’s potential will very likely land him on an NFL team come the 2018 NFL draft at the end of April.