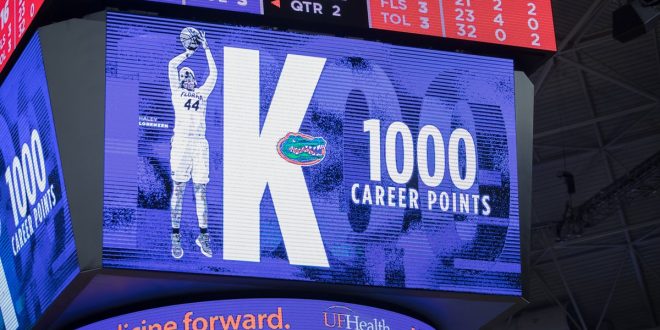 Before Wednesday afternoon, only 24 Florida Gator women’s basketball players have scored over one thousand points. Senior forward Haley Lorenzen became the 25th player to score to hit that mark in the Gators’ 85-51 win over Delaware State. The win wrapped up the non-conference part of the schedule for the season.

The crowd at Exactech Arena Wednesday afternoon came knowing that they will witness history. Fans came to the game with some holding signs with 1,000 written on them. A group of four fans wore shirts each with a digit of 1,000 on it. Lorenzen came into the game needing seven points to reach the milestone. She didn’t make the fans wait too long. With 4:14 left in the second quarter, Lorenzen surpassed the 1,000 point mark emphatically with a three-pointer from the top of the key.

Shortly after the play, Florida called timeout with 3:42 remaining, allowing the fans and the team to acknowledge what was accomplished. Former Gator Ronni Williams, the last player to reach 1,000 points, was in attendance to watch her former teammate join the 1,000 point club. Lorenzen finished the game with a double-double, 18 points and 12 rebounds. She currently has 1,011 points for her career. After the game, Lorenzen called the feat “an honor” and that she, “wouldn’t be here without my teammates now and in the past, my coaches.”

After missing the last two games with a concussion, sophomore guard Sydney Searcy returned to the court. The Gators missed Searcy’s production off the bench. She made her presence known against Delaware State. Searcy finished the game with 11 points off the bench on 3-of-4 shooting. All of her field goals came from beyond the three-point line. Searcy’s shooting performance outscored the Gators point total from the bench in the two games she missed combined.

Coming into the game Wednesday, many assumed that the non-conference season finale would be a great opportunity for the young bench players to get game experience. The game went as expected with the Gators heading into the half with a commanding 50-19 lead. Gator head coach Cam Newbauer started to get the bench involved early in the game. He sat all starters excluding Paulina Hersler on the after the first timeout of the first quarter for the role players. Excluding Searcy, the bench didn’t do much in the scoring department. However, the minutes they played Wednesday will help in the young player’s development. The bench will need to step up as the Gators start SEC play later this week.

Wednesday was a homecoming for a local high school legend. Delaware State junior guard A’nikeyawna Barber played in front of her hometown crowd on Wednesday. Barber went to Eastside High School where she was the captain of the team and a star. Her career average of  10.7 points, 5.8 rebounds, two steals, 1.2 blocks, and 1.1 assists led her to be inducted into the school’s athletic Hall of Fame. In her return to Gainesville, Barber went 5-16 from the field and finished the game with 11 points. Barber is currently in her first season with the Hornets. She is a junior college transfer from Northwest Kansas Tech.

The Gators conclude non-conference play with an 8-5 record. Coach Newbauer will have his SEC debut as Florida’s head coach on the last day of 2017. The Gators hit the road for a New Year’s Eve meeting with the Auburn Tigers. Tip-off from Auburn is set for 4 p.m.