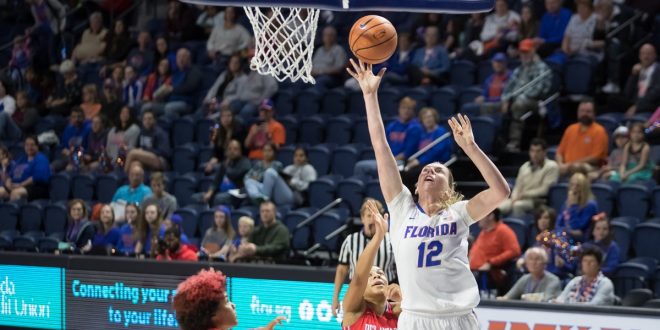 The Florida women’s basketball team will make history Sunday when new coach Cam Newbauer will lead his team for the first time in an SEC game as the Gator travel to face the Auburn Tigers.

The Gators seemed to have several key areas of improvement over the course of non-conference play. The one area that has been looked at more than the others has been toughness. Following the win over Delaware State, Coach Newbauer described toughness as, “all-encompassing form physical toughness to emotional toughness.”

Physically, the toughness has to be shown on the boards. On Wednesday, the Gators were the aggressors on the glass against Delaware State. The Gators pulled down a remarkable 68 rebounds, which is the fourth highest total in program history. The Gators have shown the potential to be dominant on the boards in non-conference play this year. It will be crucial as the team begins the SEC part of the schedule.

For emotional toughness, Coach Newbauer says that the most important thing is, “staying focused one possession at a time and being able to focus on your match up.” The Gators have experienced difficulty in sticking with the game plan of distributing the ball for the great shot. For the Gators to have success in conference play, they must play as a unit by sharing the ball.

Coming into the SEC opener, the Auburn Tigers, led by head coach Terri Williams-Flournoy, have won six straight. Auburn prides itself on stealing the ball, averaging 15.3 steals a game. Offensively, they are led by former Gainesville High School guard Janiah McKay, who’s averaging 15.3 points a game. Unlike the Gators, Auburn doesn’t “chuck it from the cheap seats.” From beyond the arc, the Tigers shoot just 24.5%.

The last game of the year will be the first game of the SEC schedule for the Gators and Tigers. Last year, these two teams started 2017 together in the SEC opener as well. Tip-off from Auburn is set for 4:00 p.m.

Previous Florida Holds Off Vanderbilt, 81-74, in SEC Opener
Next Florida Faces Tough Test vs. No. 11 Texas A&M on Tuesday