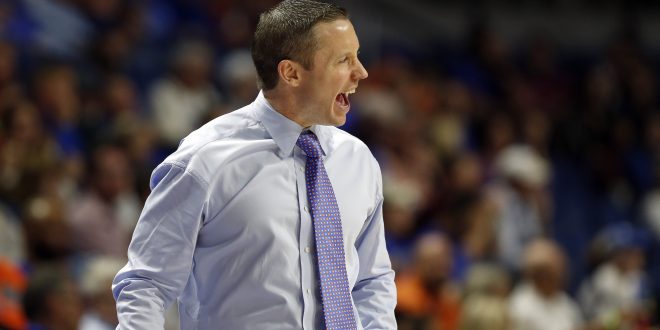 Florida Faces Tough Test vs. No. 11 Texas A&M on Tuesday

Florida’s toughest matchup of the SEC season comes only two games into the team’s conference schedule.  The Gators and the No. 11 Texas A&M Aggies are set to square off in College Station at 9 p.m. on Tuesday on ESPN2. TAMU is coming off of a tough defeat against Alabama, while UF won their SEC opener over Vanderbilt on Saturday. The Aggies are the fourth ranked opponent that the Gators have played this season.

There are two very distinct reasons as to why Texas A&M will be Florida’s toughest matchup of the SEC season. The duo of Tyler Davis and Robert Williams III may very well be the best frontcourt pairing in the nation. Davis and Williams III are averaging a combined 18.1 rebounds per game and have been dominating any and all big men that they’ve faced this season. Even in a 22-point blowout loss to the Crimson Tide, Davis and Williams III notched 28 of the team’s 57 points.

Robert Williams III is the better NBA prospect of the two and is expected to be a lottery pick in the 2018 NBA Draft. Williams III was regarded as a top-15 pick in the 2017 NBA Draft, but elected to return to College Station for his sophomore season. Standing at 6’10”, 240 pounds, Williams III is a match-up nightmare in the low post. He’s averaging a line of 8 points, 9.9 rebounds and 2.6 blocks per game this season, and is ranked 11th in defensive rebounding percentage and 28th in block percentage out of 2,160 eligible D1 players. In his last three games, he’s combined for 32 rebounds and 8 blocks.

Tyler Davis is the more versatile of the two players and can score in the post, mid-range and from beyond the arc. Davis is the team’s second-leading scorer and is averaging 13.9 points, 8.2 rebounds and 1.5 blocks per game while shooting a very impressive 60.8% from the field and 50% from long-range. He has three double-doubles in the team’s past four games, averaging 14.3 points and 12.7 rebounds in those contests.

Texas A&M has an average height of 6-feet, 4.5 inches and are the 12th-tallest team in college basketball. 8 of the Aggies’ 17 players are taller than 6’7″, while their most common lineup in the past five games (per KenPom) averages a height of 6-feet, 6.8 inches. This height advantage has contributed greatly to the team’s success on the boards and on defense. TAMU ranks 2nd in the nation in rebounds per game, 3rd in defensive efficiency, 3rd in three-point percentage defense, 24th in offensive rebound percentage and 29th in two-point percentage defense.

Three of Texas A&M’s top four scorers may be out on Tuesday night. The team’s leading scorer, D.J. Hogg, was suspended in December for three games and will be serving the final game of his suspension on Tuesday vs. the Gators. Hogg is ranked 55th in the NCAA in offensive rating (per KenPom). Both Admon Gilder and Duane Wilson are questionable with knee injuries.

Billy Kennedy said Admon Gilder and Duane Wilson are improving but likely won’t play vs Florida on Tuesday night. Texas A&M fell to No. 11 in today’s AP Poll after losing to Alabama on Saturday. #12thMan

For Florida, John Egbunu and Isaiah Stokes remain sidelined with knee injuries. It is unknown whether or not Chase Johnson will be available on Tuesday, but speculation seems to show that he will remain in concussion protocol and be unavailable for the game. Gorjok Gak is listed as day-to-day with a knee injury and is a game-time decision.

Egor Koulechov has also been dealing with plantar fasciitis through the month of December, but is expected to play on Tuesday.

White said F Egor Koulechov has been dealing with plantar faciaitis, which may have impacted his shooting in December. "I think the break helped him."

Gators Get Back On Track

Florida’s 81-74 victory over Vanderbilt was a step in the right direction for the Gators, but could’ve been better. The team led 40-20 at halftime and played one of their best halves of basketball since the first half of the Duke game in the Pk80 Tournament. The Gators were outscored 54-41 in the second half by the Commodores and were outrebounded, 23-10, in the final twenty minutes.

If Florida wants to have a shot at beating Texas A&M, especially with the Aggies’ advantage in the interior, the Gators must play a full 40 minutes of basketball without taking their foot off the pedal. In the first half, UF found success on defense by meeting Vandy at the halfcourt line and playing an “in-your-face” style of defense to force turnovers. In the second half, when the team played away from their bench and Mike White, communication was poor and the defense suffered as a result. I think the Gators would be smart to press the Aggies from the tip, especially if TAMU is without two of their best guards in Gilder and Wilson.

ICYMI: #Gators win SEC opener, 81-74, against #Vanderbilt. Mike White finally gets his first win vs. Vandy and has now beaten every SEC team in his two and a half years at UF. https://t.co/36cWtNHzo8

Tuesday night’s game tips-off at 9 p.m. at Reed Arena in College Station and can be seen on ESPN2 with Tom Hart and Jay Bilas on the call. You can listen to the game on the Gator IMG Sports Network and Sirius 84/XM 84 with Mick Hubert and Mark Wise. The game is also being broadcasted on the National Radio Compass Media Networks with Gregg Daniels and Mike Wozniak on the call.