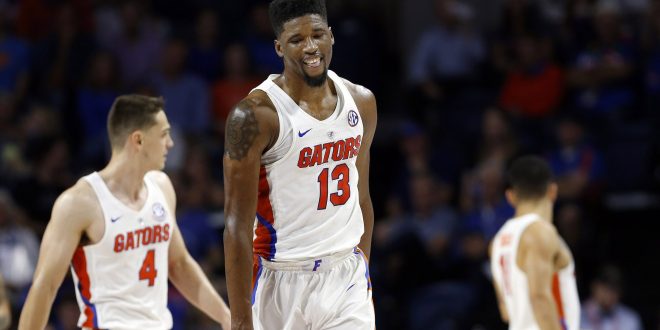 For the first time since the 2015-2016 season, the Florida Gators took down the Vanderbilt Commodores, 81-74, in both teams’ SEC opener. The victory marked Mike White’s first win over Vanderbilt while head coach of the Gators. Free throws made the difference as Florida went 22-25 from the line. Egor Koulechov led the way, sinking all 10 of his free throw attempts, en route to a team-leading 22 points.

The Gators set a season-high in blocks, swatting 10 shots. Kevarrius Hayes led the effort with 4 blocks, adding 7 points and 5 rebounds. Koulechov (22), Chiozza (17) and Allen (16) combined for 55 of Florida’s 81 total points. Vanderbilt diminished UF’s lead to four with 1:38 remaining in the contest, but couldn’t pull out the victory. The Commodores outscored the Gators, 54-41, in the second half and outrebounded them, 23-10.

Florida outshot Vanderbilt, 42%-39%, from beyond the arc and 43%-42% from the field. The Gators led for all 40 minutes of the game. Jeff Roberson paced the Commodores with 18 points and 7 rebounds. Matthew Fisher-Davis scored all 17 of his points in the second half.

The Gators held Vanderbilt scoreless in the first four minutes, jumping out to an early 7-0 lead. The Commodores missed their first four shots from the field.

Vandy scored their first basket a little over seven minutes into the game. A streak of eight missed baskets for the Gators diminished their lead to five with 11:31 remaining in the first half.

KeVaughn Allen fueled a 6-0 run with back-to-back three-pointers, both coming from a couple of feet beyond the arc. He scored 8 of Florida’s first 19 points, starting the game 3-4 from the field.

Despite playing under the weather, Jalen Hudson completed a four-point play to give the Gators an 18-point lead, their largest of the game up to that point. Following a 16-3 run, Florida led 29-11 with 5:38 left in the first frame.

The Gators closed the half on a 19-9 run, taking a 40-20 lead into the break. Florida shot 7-15 from beyond the arc in the first half and outrebounded Vanderbilt, 22-13. KeVaughn Allen led UF with 10 points in the first 20 minutes, while no Commodore scored more than 6 points.

Florida turned defense into offense, scoring 12 points off of 7 first half Vanderbilt turnovers. The Gators outscored the Commodores in the paint, 12-4, and recorded 6 blocks in the first frame. Kevarrius Hayes garnered 4 of those swats. Vandy shot an abysmal 7-25 in the first twenty minutes.

Vanderbilt opened the second half on a 9-4 run, diminishing Florida’s lead to 15 with 16:42 remaining in the contest. The Commodores hit their first four shots from the field.

Vandy continued to pound away at the Gators’ lead, pulling within 9 points on a Saben Lee layup with 14:43 left in the game. The Commodores made 8 of their first 13 shots to open the second half.

Chris Chiozza scored 6 straight points for the Gators to extend their lead to 11 with 7:58 left in the first half. Despite this, Vanderbilt outscored Florida, 32-23, in the first 12 minutes of the second half.

The Gators entered the double-bonus with 4:53 remaining in the contest. Koulechov knocked down a pair of free throws on the foul to give Florida a 9-point lead. He opened the contest 6-6 from the charity stripe.

Vanderbilt came within four points late in the second half, but never closer, as the Gators went on to win 81-74.

The Gators have two days off before starting 2018 with a January 2nd meeting with the Texas A&M Aggies in College Station.