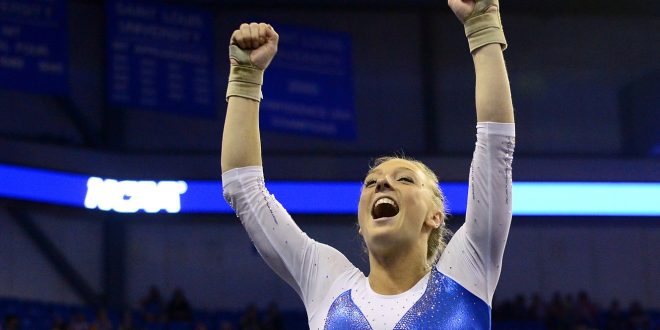 This collegiate gymnastics season is Florida standout Alex McMurtry’s last. She was the de facto team leader as a junior, but this year, she looks even better.

During Florida’s home opener against top ranked LSU, McMurtry gave the Gators a show. Despite not competing on floor due to a back injury, she scored some of the highest marks of the night on the vault, beam, and uneven bars.

McMurtry closed out Florida’s first rotation on the vault, an event she’s received a perfect ten in… twice.  After cheering on her teammates, she looked at ease when she took the floor. She did a small dance move and then took off running, eyes glued to the vault.  In a flash, the senior flipped with ease and stuck her landing. McMurtry, a self-proclaimed perfectionist, beamed with pride and ran to her teammates.

She eyed the score like a hawk until the results flashed on a massive screen in the Exactech Arena. 9.90, the highest vault score for the Gators.

But, McMurtry didn’t bask in the glory of the top score for long… she was ready for the bars.

McMurtry is typically a lively presence during other performances. But, before her bars rotation, she snapped into focus mode.

She spent her two-minute practice period studying the bars themselves. Once again, she rounded out the Gators.

Before her turn, she shimmied again and took her first jump.  She didn’t score a 10, but incredibly sharp poses and fluid jumps highlighted the performance.  Once again, McMurtry waited anxiously for her score. This time, it was higher at a 9.925.

9.925 ended up being the highest score between both teams, with McMurtry winning the bars.

The beam finished Alex McMurtry’s home opener performance.  After her strong performance on the bars, any nerves she may have had seemed to melt away.  She spent the rotation dancing and laughing with her teammates, while also providing a strong support system.  Fans in the sold-out arena saw her practice, but nothing prepared them for the actual performance, which featured McMurtry wrapping herself around the beam for a somersault.

When she finished, she ran to coach Jenny Rowland, tears streaming down her face.  She finished with a 9.9, trailing only .05 behind the night’s beam winner, Gator Rachel Gowey.

McMurtry’s back prevented her from competing for an all-around title, but the 29.925 that she finished with was still admirable. This year, Gator fans will see the final step of Alex McMurtry’s journey as a Florida Gator. And if Friday’s matchup against the top ranked team in the country was any indication of how McMurtry’s season will pan out, she (and Florida) should be very proud.