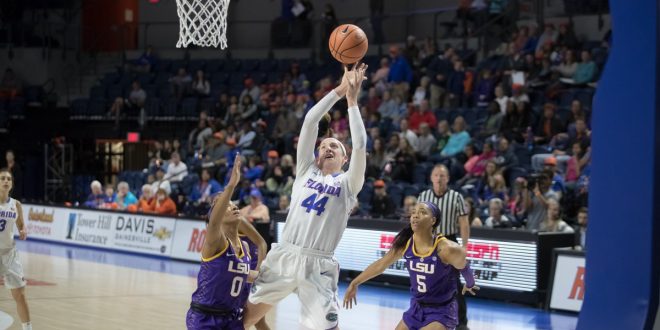 The Florida women’s basketball team is still searching for its first SEC win after dropping a 66-59 home game Sunday to visiting LSU.  Florida started out well, leading by as many as 12 points in the second quarter.  Heading into the half, the Gators led 33-29. Florida was 8-3 when having the lead at half. But in the second half, the Gators allowed missed shots on the offensive end that affected their confidence on both sides of the floor. This led to Florida dropping their fifth straight in conference play.

Toughness has been something that the Gators have lacked this season. It showed once again Sunday afternoon. The Gators shot the ball very well to start the game, shooting 57% (8-14).  This allowed Florida to have a three point lead after the first quarter.

That confidence would slowly fade in the second half as the Gators opened the third quarter missing their first five shots. Florida’s slow start opened the door for LSU to take full control of the game. Gator coach Cam Newbauer says he has seen a direct correlation between the team’s ability to fight and whether shots are falling or not. The Gators started to hit shots late in the game which allowed them to get some stops and cut the LSU lead down to five. According to Newbauer, the best way to combat this season-long trend is for his team to show toughness when things get hard.

The numbers led many to believe that LSU was ready to feast on Florida turnovers Sunday afternoon. The Tigers came into the game ranked second in the SEC in steals per game and third in turnovers forced. That was the case very early in Sunday’s game. LSU forced three Florida turnovers within the game’s two minutes. They lived up to their reputation in the steals department on Sunday. The LSU defenders got their hands into the passing lanes and disrupted the Gator offense. LSU finished the game with eight steals. Florida senior forward Haley Lorenzen says the turnovers threw the Gators out of rhythm.

The Gators’ continuing inability to figure out the full court press made an appearance Sunday. LSU executed the press through most of the game Sunday to much success. Florida turned the ball over 16 times and LSU turned those mistakes into 20 points. Gator junior guard Funda Nakkasoglu says LSU’s pressure was expected and its something the team needs to work on.

Even with the troubles starting quarters and overcoming turnovers, the Gators had a chance to win this game in the fourth quarter. Florida started the quarter 0/7 from the field. It took a tip-in and one from Lorenzen, who finished with a career high tying 20 points and 10 rebounds, to break the cold spell. This cut the LSU lead to 13 with roughly six minutes left. This started a 10-0 run for the Gators. Jump shots from Paulina Hersler and clutch free throws from Lorenzen and fellow senior Dee Anderson served as the fuel to the run. A six minute scoring drought for the Tigers helped the Gators out as well.

The lead was down to five when Anderson had a clean look at a running layup but missed. If the layup went in, we could be talking about a different outcome. Off the Anderson miss, LSU’s Chloe Jackson nailed a jumper to extend the lead to seven. The Gators got within five again, but there were only seconds remaining in the game. The loss brought the losing streak to five for the Gators. Hersler says that the team is just focused on improving game by game.

The Gators continue to their quest to capture that first SEC win. The search continues Thursday in Arkansas as the Gators face the Razorbacks with tip-off set for 7 p.m.