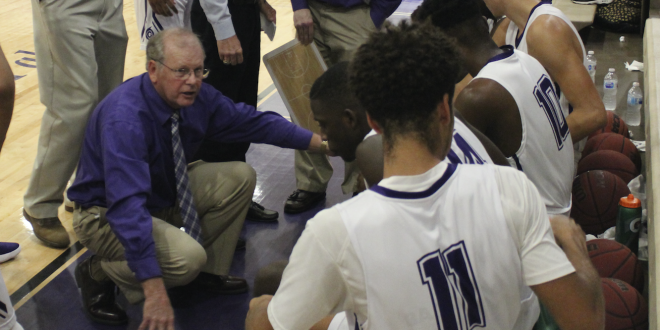 High school basketball is continuing throughout the season, with both boys’ and girls’ games occurring tonight, Friday and Saturday.

Boys’: The Lake Weir Hurricanes will face the Gainesville Hurricanes tonight at 7. Gainesville is currently 13-4 and is ranked 27th in the state, per MaxPreps. Lake Weir, on the other hand, is struggling mightily this season. The team currently boasts a 4-11 record and is 0-7 in its district.

Boys Basketball hosts Lake Weir tonight in the "Battle of the Hurricanes" in the Purple Palace. JV plays at 5:30 PM and Varsity starts at 7 PM.

Gainesville head coach Kelly Beckham was interviewed by Steve Russell on Russell’s show Sportscene. During the interview, Beckham said that one of the things he likes about his players is that they play hard on defense despite being undersized. Gainesville is allowing an average of 56 points per game. The team has a veteran presence, according to Beckham, and has returned three starters from last season.

Girls’: The Gainesville Hurricanes will be at Eastside tonight at 7:30 to take on the Rams. The Hurricanes are having a very solid year, boasting a 14-7 record including 5-2 in district play. They are led by their two leading scorers, Leaundranae Young (19.4 PPG) and Madison Johnson (12.7 PPG). The Rams are having a decent season so far with an 8-7 record including 2-0 in district play. The team is currently coming off a two-game win streak including a 66-31 blowout win over the Santa Fe Raiders.

The Santa Fe Raiders will face the Buchholz Bobcats tonight at 7. The Raiders currently boast a 5-9 record and are 0-3 in district play. The Bobcats are 7-9 with a 0-5 district record.

Boys’: The PK Yonge Blue Wave will face the Maclay Marauders tomorrow at 6:30 p.m. The Blue Wave are one game below .500 at 8-9. They are coming off a 58-32 win over the Oak Hall Eagles. The Marauders, meanwhile, are having a very good season so far with a 10-5 record.

The North Marion Colts will visit Santa Fe to take on the Raiders at 7:30 p.m. The Colts currently have a 10-6 record including 5-1 in district play. The Raiders, meanwhile, are 4-7 and boast a 2-3 district record.

The Interlachen Rams will travel to Newberry to take on the Newberry Panthers. The Rams have been a dominant team so far, boasting an 11-3 record. The team is currently riding a five-game winning streak. The Panthers are only 7-6 so far, but they have been very good in district play with a 6-1 record.

Girls’: The Maclay Marauders will visit PK Yonge to face the Blue Wave at 5. The Marauders are 7-10 and coming off a two-game win streak. The Blue Wave is having a very good season with a 13-4 record.

The Gainesville Hurricanes will take on the Buchholz Bobcats at 7:30 p.m.