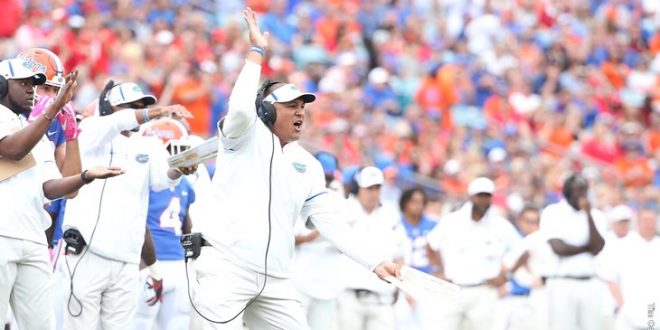 Ja’Juan Seider to Leave Florida Football After One Year

The last member of Coach McElwain’s staff is now on the move. After just one year with Florida football, former running back coach  is leaving Gainesville. This move will be Seider’s fourth since 2000, starting at Marshall and West Virginia before coaching the Gators.

When Dan Mullen came to town, he essentially cleaned house on staff. Only a few of Mac’s men remained, but all except Seider pursued other opportunities.

Here’s where it gets confusing, though. Florida’s run game was one of only a few bright spots from last year’s season. So, when Mullen kept Seider on staff, many breathed a sigh of relief for the backfield.

Except, he would not be coaching the backfield in 2018. Rather, he would coach the relatively unproductive tight ends. This move by Mullen might have been a push to get a good coach in an okay position. It might be a vision of RBU and 1000-yard backs, which Seider failed to produce last season. But, Seider has served as running backs coach since his early beginnings at Marshall.

A report revealed that Seider interviewed with the Cleveland Browns in his staple position. However, according to a more recent report from Penn State’s student newspaper, he will head to the Nittany Lions as a wide receivers coach. It is unclear why Seider would take a position change from a new team.

What Will the Gators Lose?

Florida’s deep running back corps will remain intact thanks to four returners and two early enrollees. But, Seider’s recruiting efforts extended beyond running backs. Most recently, he is listed as the sole recruiter for 4-star wide receiver commit Justin Watkins. (Watkins de-committed from three different schools before calling himself a Florida commit).

But, any football fan in the state knows that top recruits are found in and around the close-knit 305. Seider, a Belle Glade native, is known to have a strong influence in football-crazed South Florida. Without him and defensive coordinator-turned-interim-coach Randy Shannon, the Gators hold a lot less weight on the recruiting trail below Broward County.

Seider’s absence is not expected to have much of an impact on 2018’s signing class, but losing out on top recruits in the state could eventually catch up to the Gators.

Who Will Round Out the Staff?

The good news for Coach Mullen is that his staff was complete before Seider’s change of heart. The bad news is that he has another vacancy to fill… right before National Signing Day. There are no reported front-runners for the job, but updates will come.