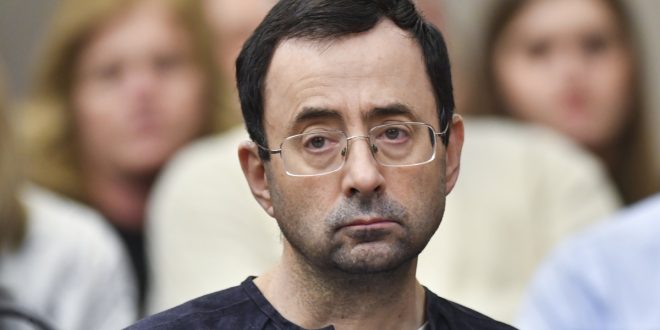 Dr. Larry Nassar is Sentenced by an Emotional Judge Aquilina

“I just signed your death warrant,” Judge Rosemarie Aquilina said as she sentenced Lawrence G. Nassar with 40 to 175 years in prison for multiple sex crimes.

The former doctor for the United States gymnastics team was faced by more than 150 victims, who bravely appeared in court, and many, looking him in the eyes made their statements against him. Judge Aquilina made it clear that the 54-year-old was likely to die in prison.

Nassar’s attorney Matt Newburg told the Judge about the backlash he has received doing “what our constitution requires,” and standing by Nassar. The attornery said he will do so for this trial and every other trial.

“As we sat in the court this morning we received an email from someone who is anonymous that wished death upon our kids,” Newberg said. “For standing next to the man and upholding a constitution, a document, and an oath that we took when we went to law school.”

Before the sentencing the judge read a letter Nassar wrote to the court recently, where he defended his medical care and said he was “manipulated” into pleading guilty and accused the women of lying.

“I was a good doctor because my treatments worked, and those patients that are now speaking out are the same ones that praised and came back over and over,” Nassar wrote. “The media convinced them that everything I did was wrong and bad. They feel I broke their trust. Hell hath no fury like a woman scorned.”

After tossing aside Larry Nasser’s letter where he appears to not accept he is in the wrong, Judge Rosemarie Aquilina tells him “I wouldn’t send my dogs to you sir.” pic.twitter.com/W6PRQyH7KE

Nassar was given the opportunity to address the victims in court before his sentencing. He took that time to turn around to face some of the victims and apologize to them.

This sentencing in on top of the 60 years he will be in prison for child pornography.

Nassar pleaded guilty to seven counts of criminal sexual conduct in Ingham County in Michigan and admitted to using his trusted medical position to assault and molest girls under the guise of medical treatment.

This case has brought to light all those who played a role in letting Nassar get away with the abuse young girls had to experience for years.  This week, the chairman and several board members of the governing body in U.S.A. Gymnastics resigned and last week they – claimed to have cut ties with the well-known Texas ranch, where several gymnast say they were preyed on by the doctor.

But 2-time Olympian, Alexandra Raisman said in her statement last week that although it was said the Karoyli ranch had been shutdown, gymnast were still posting training pictures at the training center. U.S. Gym had planned to buy the ranch, but backed out in August 2016 following an investigation on the abuse so many athletes experienced there.

Meanwhile at Michigan State, where Nassar spent years on the faculty and treated many of its athletes, president of the university, Lou Anna K. Simon, resigned Wednesday after all the buildup from this case.

Moments after the judge delivered her sentencing to Nassar, the Olympic committee issued a statement calling on the U.S.A. Gymnastics board to resign and promised to take additional steps to investigate what happened between Nassar and the athletes. The Olympic committee’s chief executive, Scott Blackmun, also apologized for not attending the hearing, after gymnasts made it clear that U.S.O.C. has not been supportive throughout this process.

The hearing was set to conclude after 4 days, but that all changed as more women came forward wanting to make a statement. Some who have accused him are the Olympic gold medalists Aly Raisman, McKayla Maroney, Gabby Douglas, Jordyn Wieber and Simone Biles.

Rachael Denhollander, who was one of the first women to come forward with public accusations against the doctor labeled Nassar as one of the most dangerous type of abuser.

“One who is capable of manipulating his victims through coldly calculated grooming methodologies, presenting the most wholesome and caring external persona as a deliberate means to ensure a steady stream of young children to assault,” Denhollander said.

Judge Aquilina praised Ms. Denhollander for bringing this situation to light. “You are the bravest person I have ever had in my courtroom,” she said.

Aly Raisman has been praised for her strong statement in court last Friday, as she seemed not one bit phased looking her predator in the eyes.

“Imagine feeling like you have no power and no voice,” Ms. Raisman said in court last Friday. “Well, you know what, Larry? I have both power and voice, and I am only just beginning to use them. All these brave women have power, and we will use our voices to make sure you get what you deserve: a life of suffering spent replaying the words delivered by this powerful army of survivors.”

Olympian Maroney had signed a nondisclosure agreement with U.S.A. Gymnastics as part of a lawsuit, that would have caused her to be fined more than $100,000 for speaking about the abuse. Many celebreties came forward offering to pay the fine, which led the organization to stating they would not fine her.

“Dr. Nassar was not a doctor,” she said. “He in fact is, was, and forever shall be a child molester, and a monster of a human being.”

Judge Aquilina made it clear that this is something not just him but the world will forever see him as.

After the abuse girls suffered for over two decades Nassar will spend his life, and more behind bars. Nassar also pleaded guilty in November on three sexual abuse counts in a neighboring county and will face sentencing later this month.

Previous Ja’Juan Seider to Leave Florida Football After One Year
Next No. 9 Gator Men’s Tennis Looks to Improve to 2-0