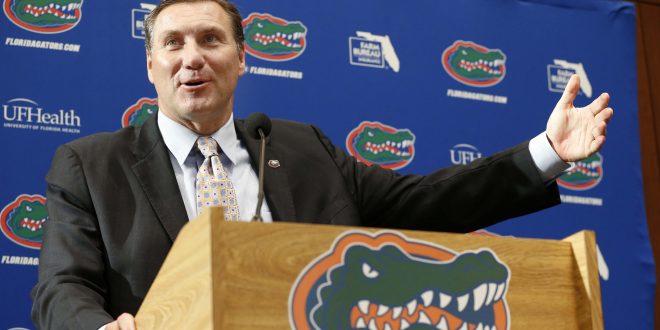 With National Signing Day just two weeks away, Gators Football head coach Dan Mullen and his staff continue to build on an already successful 2018 class. According to ESPN, Florida currently boasts the 18th best recruiting class in the country. The Gators have 16 commits already and look to build on that as Signing Day approaches. They will have the opportunity to better their chances of adding to that number when they host official visits this weekend.

Top Of His Class

Florida welcomes a highly sought after recruit to campus this weekend that could boost the 2018 class. Offensive lineman Nicholas Petit-Frere from Tampa, Fla. is the highest ranked offensive tackle in the class. Petit-Frere is also ranked as the fourth best player overall by ESPN. Adding the 5-star tackle is a high priority for Mullen and new offensive line coach John Hevesy. The Gators were able to secure one of Petit-Frere’s final three official visits. Last weekend, the Berkely Prep star visited with Alabama. He will make his official visit to Ohio State next weekend before National Signing Day. Having one of Petit-Frere’s final visits helps Florida’s chances of keeping him in state.

Anytime the Gators and Seminoles are competing against one another, either on the field or off the field, tensions are high. That can be said for the recruiting battle going on between the two rivals in landing 4-star defensive end Malcolm Lamar. Lamar makes his official visit to Gainesville this weekend. It appears that the Gators will have to really sell Lamar on becoming a Gator. Lamar has a good connection with new Florida State head coach Willie Taggart. Lamar comes from Seffner, Fla., which is 27 minutes away from the University of South Florida campus where Taggart was the head coach. He had his official visit to Tallahassee in December.

Battling With The Best

The Gators could face an uphill climb in persuading 3-star defensive end Malik Langham to join the Gators. Many believe that Langham is leaning towards Alabama. He made his official visit to Tuscaloosa last weekend. Langham’s interest in the Tide is justified being that he’s from Huntsville, Ala. His visit to Florida won’t be his last before Signing Day. Next weekend, Langham will meet with former Alabama defensive coordinator and now Tennessee head coach Jeremy Pruitt in Knoxville.

The Gators hope for the best in locking in these recruits officially on National Signing Day on February 7.