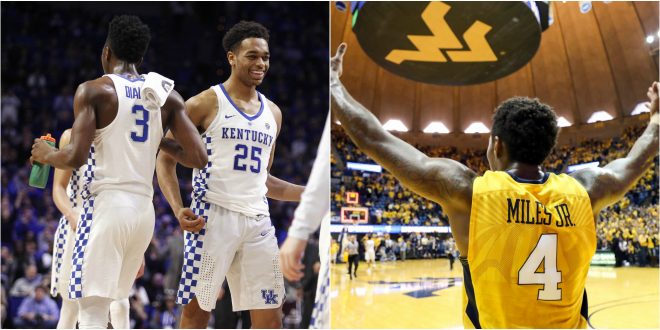 The SEC/Big 12 Challenge takes place on Saturday for college men’s basketball.  There will be 10 games played between the two conferences.

One of those games includes un-ranked Kentucky at no. 7 West Virginia.  This will be the third time the Wildcats play in Morgantown and the first time since 1970.

Kentucky leads the record between these two teams, 15-5.  The last time these two teams met was in 2015 and the Wildcats crushed the Mountaineers 78-39.

What Kentucky Needs to Do to Win

The Wildcats are not on the AP Top 25 list the first time since 2014.  However, this shouldn’t let anyone from thinking Kentucky isn’t a good team this year.

Head coach John Calipari does not pay attention to these standings and knows his team faces very tough opponents.

PJ Washington had a career high of 22 points against Mississippi State, but Shai Gilgeous-Alexander was praised more for his 18 “new”assists.

Calipari is doing everything to help his team see and reach its potential together.

He is now having his team play a rotation style similar to what he did with his 2014-2015 team.

Right now it’s all about testing new ideas to see what works and connects a team.  If the Wildcats aren’t playing as a team, then they will have a very hard time against opponents.

What West Virginia Needs to Do to Win

The Mountaineers are coming off a rough loss against TCU on Monday.  The team has a lot of days to rest and recollect after the 82-73 loss.  WVU has lost the last three of four games. Those losses have made the Mountaineers very angry and they are ready to play.

WVU’s defense averages 19.1 forced turnovers per game, which puts them at fourth in the nation for forced turnovers per game.  Kentucky has been on turnover streak in their last 3 games- 11 against Mississippi State, 16 against Florida and 16 against South Carolina.  If West Virginia keeps their high-intensity, turnover forcing defense, the Mountaineers will stop the Wildcats.

On offense, WVU needs to get their shots to fall and if they aren’t, find another way to score.  Senior guard Daxter Miles is not scoring like he has in his last three years.  He went 5-15 in the TCU game.  Miles’ highest scoring average of the season was 18.3 points.  That was after the third game of the season.  Then it stay around 14-15 points, but after the Kansas State game where he didn’t make any three pointers, his average has dropped.

Now, Miles’ average is sitting steady at 13.1, which isn’t bad.  However, he isn’t changing things up to find other ways to score.

This is who we are. This is what we do. This is West Virginia Basketball.

Fun Facts about the SEC/Big 12 Challenge

This year is the fifth annual SEC/Big 12 Challenge and the challenge trophy has never left the Big 12 office.

Here is a list of all the games, times and where you can watch them:

Nicolette is a senior at the University of Florida who has participated and enjoys reporting on all things related to sports.
Previous No. 22 Tennessee Volunteers visit 11-8 Iowa State Cyclones
Next Santa Fe’s Baseball Season Begins January 26