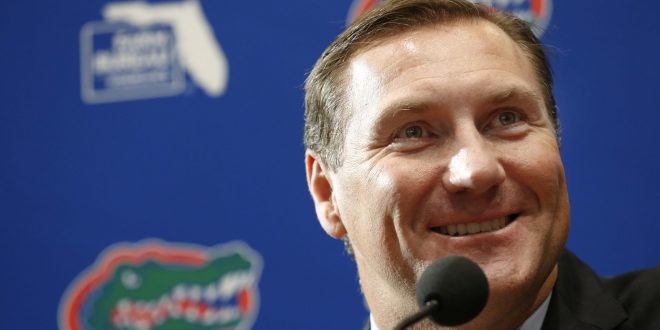 Gators Football Recruiting: Several Visit, But No Commits Over the Weekend

The intensity in recruiting has ramped up across the country with National Signing Day just nine days away.

Despite landing no commitments over the weekend from a slate of visitors, Dan Mullen and his staff hope they will at least have improved their chances with several key recruits.

Focus on the O-Line

Among the two players being heavily recruited by Florida are two offensive linemen from Tampa who both visited Gainesville over the weekend.

Nicholas Petit-Frere, a 5-star offensive tackle from Berkeley Prep and the top ranked offensive tackle recruit in the country, according to the 247 composite rankings, has been the Gators main target to beef up the offensive line.

Along with his visit was Richard Gouraige, a 4-star from Cambridge Christian and the No. 7-ranked offensive tackle recruit in the country.

His commitment to Florida came under Jim McElwain’s staff, so he’s continued to explore his options.

Florida is favored by both of the linemen from Tampa, with Alabama also in the mix for Petit-Frere, while Ole Miss and Clemson are in it for Gouraige.

Opposite Side of the Ball

Not all of the focus was on the offensive side of the ball though. The Gators also welcomed a few defensive lineman as they look to bring in players for new defensive coordinator Todd Grantham’s 3-4 scheme.

One big name Florida welcomed was Andrew Chatfield, a four-star defensive end from American Heritage in Fort Lauderdale. He is ranked as the No.13 weak-side defensive end in the country and is between Miami and Florida.

Also on campus this week was Malik Langham, a 4-star defensive end from Huntsville, Alabama. He named Alabama his leader after his official visit to Tuscaloosa last week. However, the Gators were able to secure one of his final official visits before signing day. He is scheduled to visit Tennessee next week before making a decision.

Native New Englander. Follow me on Twitter: @jonacosta_10
@jonacosta_10
Previous Outside The Lines Brings Attention to MSU Basketball Program
Next History Was Made in the 2018 Australian Open