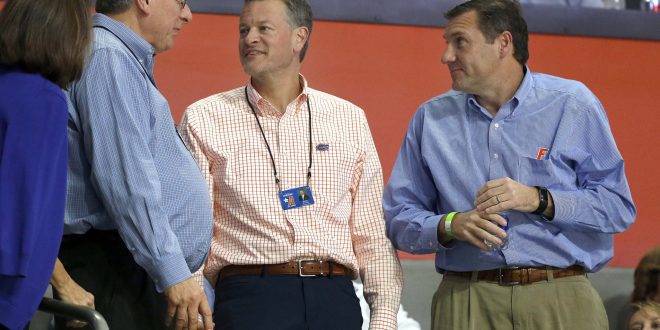 Florida Gators athletic director Scott Stricklin would appear on Sportscene with Steve Russell on Thursday. During his interview, listeners of the show would call in to ask about a plethora of topics, including new facilities, pay-to-play and adding a new sport. Let’s recap what Stricklin would talk about on the show.

About to jump on @ESPNGainesville with Steve Russell. #GoGators

One of the questions that came up was regarding an update on the new facilities that are coming to Florida. In another appearance from August, Stricklin would plant the seed on the new facility, as well as their plans for a new one. While he mentioned it would be an issue for the planning committee, it would allow him to get creative.

While he would say that “we are not in a position to give a lot of detail right now,” he would speak about what the proposed plans are for three new facilities.

These new facilities will be for a stand-alone football complex, as well as upgrading the softball and baseball complexes as well.

Another topic that would come up for Stricklin is the ongoing debate of college athletes getting paid to play. While it’s still a hot topic of debate for many, Scott would add his take on the matter.

The topic is one constantly debated but is one that Stricklin looks at from a perspective of fairness for the athletes and staff involved in collegiate athletics.

During the candid interview, Stricklin also would reveal that he is looking to add another sport on campus, specifically a women’s team. While there’s no sport specifically being looked at right now, Stricklin would say they are looking at different possibilities.

Stricklin would follow up with talking about how Title IX would come into play with whether it would be a women’s or men’s team added at Florida.

Sportscene with Steve Russell is on the air every day at noon on WRUF. For the latest in all things gator sports, stay with ESPN 98.1 FM – 850 AM WRUF, as well as WRUF.com.