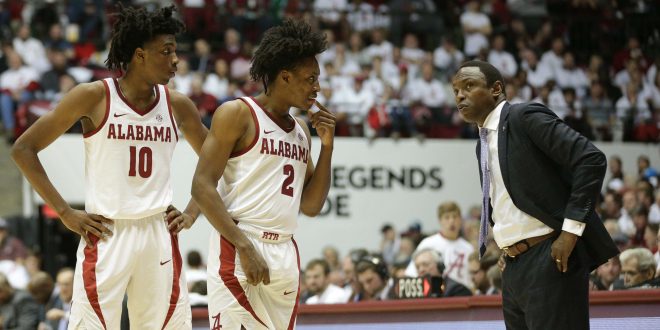 The Alabama Crimson Tide have been riding a roller coaster of emotions in recent days. A week ago, Tuscaloosa was buzzing with excitement following the team’s 80-73 victory over No. 12 Oklahoma. Then, on Wednesday night, the Crimson Tide offense went cold in a disappointing 69-60 home loss to Missouri. This Saturday, they’re hoping to get back on track when they hit the road to take on the Gators.

In order to beat Florida, Alabama head coach Avery Johnson needs a couple of secondary scoring options to step up and help star guard Collin Sexton. Fellow freshman John Petty is second on the team in scoring with 11.5 points per game. Alabama is 6-0 in games when he scores more than 15 points.

With Florida still awaiting the return of John Egbunu, Alabama needs to capitalize on the Gators’ lack of size. Florida is often forced to pack the paint and as a result they rank dead last in the SEC in 3-point percentage allowed. If Sexton’s supporting cast can knock down some open 3-pointers, Alabama will have a solid chance.

Alabama also needs to start capitalizing at the free throw line. On average, the Crimson Tide are fouled 20 times per game. They convert just 68.1 percent of their free throws.

Another key factor for success will be the play of Dazon Ingram. He contributes in a number of ways on the offensive end. This season he’s averaging 10.9 points, 6.2 rebounds and 3 assists per game.

The two best units on the court in this game will be Florida’s offense and Alabama’s defense. According to KenPom.com, Alabama has the most efficient defense in the SEC. Florida ranks third in the SEC in offensive efficiency.

One key strength for the Alabama defense is the presence of forward Donta Hall. The Crimson Tide rank fourth in the country with 6.2 blocks per game. Hall accounts for 2.3 of them. His presence could help limit the Florida guards’ ability to score on the drive.

In general, Alabama’s height and length will be a tall order to handle for Chris Chiozza and KeVaughn Allen. They’re a combined six inches shorter than Alabama guards Sexton and Petty.

The last time these two teams met in Gainesville, Alabama took home a 61-55 victory. You can listen to coverage of Saturday’s game beginning at 3:25 p.m. on WRUF.

I'm an above-average golfer with surprisingly great touch around the greens. Click on my twitter link for some sports talk.
@Ry_McGinn
Previous Tom Brady is Ready to Make History
Next SEC Hoops Preview: No.18 Tennessee Hosts Ole Miss