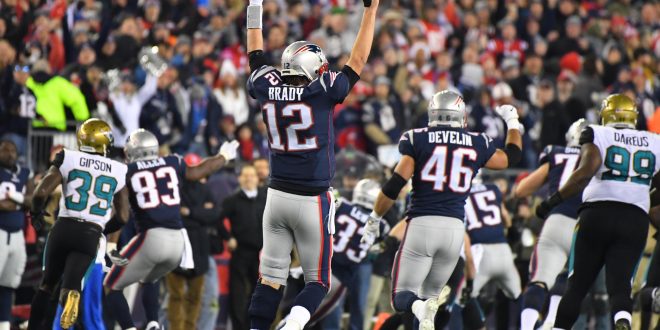 Super Bowl LII is this Sunday and the New England Patriots are playing in it…again.  The Patriots and Tom Brady are defending their championship title against the Philadelphia Eagles.

These two teams have met in a previous Super Bowl. Back in 2005, the Patriots beat the Eagles 24-21.  This was Brady’s third Super Bowl title with the Patriots.

How Many Super Bowl Titles Does Tom Brady Have?

Brady has been to seven Super Bowls and won five.  Here’s a list of his record:

What a Sixth Super Bowl Win Will Do For Tom Brady?

Brady is the only quarterback in NFL history to play in seven Super Bowls and win five championship titles.

His eighth game is on Sunday and this game makes it harder for any other quarterbacks to touch him.  The next closest quarterback to reaching Brady’s Super Bowl appearances is John Elway, who played in five and only won two titles.

A win will also break a 51-year quarterback curse: no quarterback has led the NFL in passing yards and won a Super Bowl in the same year.

Brady is sitting in second this postseason with 627 yards.  The leader, Drew Brees had 670 yards in these playoffs.  Brady averaged 288.1 yards each game this season.

A sixth Super Bowl win gives Brady the title of best quarterback in NFL history, if he hasn’t already claimed it.

Some fans are wondering if a win would make Brady retire. However, Brady made it very apparent he was not going anywhere after his sixth win.

The Super Bowl will be played on Sunday in Minnesota.  Kick off is at 6:30 P.M.

Nicolette is a senior at the University of Florida who has participated and enjoys reporting on all things related to sports.
Previous Doug Pederson’s Path to Super Bowl LII
Next Alabama Looking to Spoil Gators’ Saturday