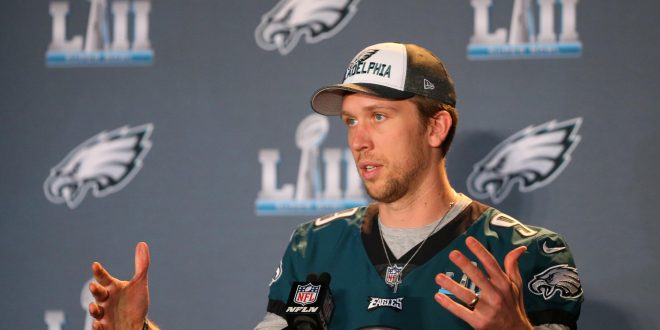 As the Philadelphia Eagles prepare to face the defending champion New England Patriots in the Super Bowl on Sunday, quarterback Nick Foles has been making his own preparations for starting in the biggest game of the NFL season. This will be his first-ever start in a Super Bowl, but he’ll look to continue the momentum the Eagles gained during the playoffs.

Foles Preparing For His Start

After serving most of the season as the Eagles’ backup, Foles became the starter after quarterback Carson Wentz suffered a season-ending injury in December. Since taking over in that role, he led Philadelphia to two wins to finish the regular season with a 13-3 record and a first-round bye in the playoffs. In two playoff games, Foles led the Eagles to a 15-10 win over the Atlanta Falcons in the divisional round and a 38-7 win over the Minnesota Vikings in the NFC championship game.

With the Lombardi Trophy on the line, Foles talked about the transition from being a backup to the starter. He said he’s getting his reps in and getting comfortable with running the plays he likes.

In his two postseason starts this year, Foles has thrown for 598 yards (third-most in the playoffs behind Tom Brady and Drew Brees), three touchdowns, zero interceptions and a 122.1 passer rating. In their conference championship victory over the Vikings, Foles led the Eagles with three touchdowns and a 141.1 passer rating. He’ll look to continue that success against a Patriots team that has allowed an average of 237.5 pass yards per game this postseason.

Slowing Things Down on Sunday

With all the pomp, circumstance and hype surrounding Super Bowl Sunday, there are plenty of reasons to get caught up in all the excitement. Foles said slowing the game down and thinking more clearly helps him to make better decisions during a game.

This isn’t the first time he’s mentioned slowing the game down. Following his historic seven-touchdown performance over the Oakland Raiders in 2013, when he tied a single-game record, Foles shared some similar thoughts. Though he might not throw for seven touchdowns, Foles will look to simplify the game on the big stage.

Looking Forward to ‘That’ Moment

When he runs out of the tunnel onto the field at U.S. Bank Stadium in Minneapolis, Foles said he won’t know what he’ll feel like in that moment. But he said he’s excited and looking forward to being out there with his teammates. The sixth-year quarterback has only played in a select number of playoff games and none this big.

Foles said they’ll have to practice like they play because of the different time allotments and routine for this game. He also said he’s glad they cleaned up any mistakes in practice so they don’t happen during the game.

Super Bowl LII between the Eagles and Patriots will kick off at 6:30 p.m. on NBC and Westwood One Radio.