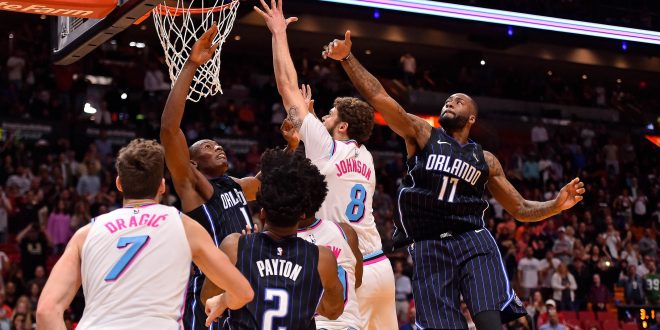 The Miami Heat took a close 109-111 upset at home against the Orlando Magic on Monday. This is their fourth consecutive loss, having previously fallen to the Pistons, the 76ers and the Cavs. The Heat now have a record of 29-25 while the Magic improved their record to 16-36.

What Went Wrong for the Heat

What factors contributed to the Heat losing a home game to the worst team in the East? Well, Hassan Whiteside was back in after missing Saturday’s game due to a stomach ailment and put up the Heat’s first nine points, and things looked optimistic after clenching an early 12-point lead. But Center Kelly Olynyk left in the first quarter with a strained shoulder after colliding with Bismack Biyombo. His seven minutes on the court went scoreless and he was replaced by Jordan Mickey. The Heat also couldn’t seem to sink their three-pointers, only making 3 for 23(13 percent.) Even Wayne Ellington was zero for 8 in threes. Josh Richardson was able to tie the game up with three minutes remaining, but the Heat were overtaken when Jonathon Simmons made a 1-foot driving dunk.

Richardson led the Heat’s shooters with 20 points, while Whiteside racked up 14 rebounds and Goran Dragic led assists with 7.

What Went Right for the Magic

Orlando had something to prove with this game, going into it with the NBA’s worst record and coming off of a 98-115 loss against the Washington Wizards. Despite missing leading scorer Aaron Gordon with a hip injury, the Magic were able to take the lead in the third quarter and extend it to 14-points midway in the fourth. Their three-point game was on- they made 13 for 30. Leading scorers for the Magic included power guard Mario Hezonja with 20 points,  reserve guard D.J. Augustin with 16 points and shooting guard Evan Fournier with 13.

The Miami Heat take on the Houston Rockets(38-13) Wednesday at home while the Orlando Magic have a home matchup with the Cleveland Cavaliers Tuesday at 7 p.m.

Previous Tyler Dyson: A Critical Cog for Gator Baseball’s 2018 Success
Next Can Cleveland move past this rough patch?