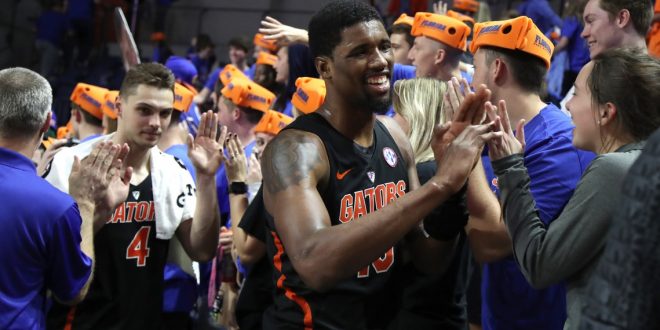 The Florida Gators ended Wednesday night’s game on a 13-3 run over the final 5 minutes and 26 seconds of the contest, taking down LSU at Exactech Arena, 73-64. The Gators snapped their two-game losing streak in large part to Jalen Hudson and Egor Koulechov’s exceptional play down the stretch. The duo combined for 23 of Florida’s final 42 points. Hudson paced the team with 18 points on 7-13 shooting from the field, leading the team in scoring for the first time since January 24 vs. South Carolina.

Florida outscored LSU in the final twenty minutes, 42-31, and shot 57.1% from the field and 40% from beyond the arc in the second half. Aggressive defense down the stretch forced the Tigers to miss 9 of their final 11 shots. The Gators will have two days off before taking on the South Carolina Gamecocks in Columbia on Saturday at Noon.

"That's as hard as he's played in any game or any practice. He had great activity on the ball, guarding the basketball." -Mike White on Jalen Hudson

The Gators shot 52% from the field vs. LSU, their highest mark since November 23 vs. Stanford. Driving to the basket and attacking the rim contributed in large part to that.

Keith Stone said he's been more patient on offense and is taking more of what the defense is giving him. His drives to the basket have really opened up the floor for his teammates.

Mike White on Florida getting to the rim on Wednesday night vs. LSU:

Mike White said Jalen Hudson played as hard on Wednesday night as he has this season in a game or practice:

Mike White on Michael Okauru’s effective performance off the bench:

Mike White on his team’s poise and toughness down the stretch:

"I thought it was his best game…I thought he was very good defensively and did a good job cutting offensively." -Mike White on Michael Okauru