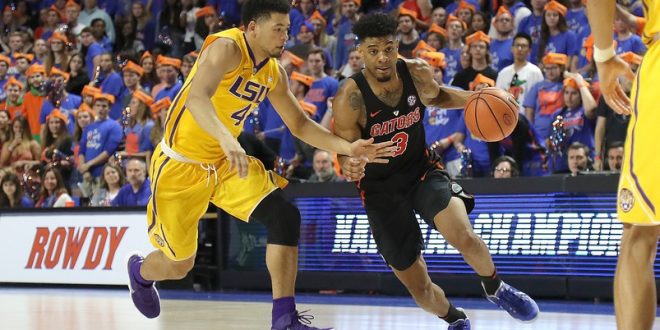 Florida Ready For Revenge in Saturday Showdown With South Carolina

It’s no secret that Florida has struggled to win games over South Carolina since the Mike White era started. The Gators are 1-4 against the Gamecocks since the 2015-2016 season and lost those four games by an average margin of 5 points per game. In the second half of those losses, UF was outscored by SCAR, 152-121. The most recent tilt in Gainesville went South Carolina’s way as the Gamecocks rode Chris Silva and Wesley Myers’ 40 combined points to a 77-72 victory. The two teams meet again on Saturday at Noon in Columbia on the CBS. The Gators are 1-1 in CBS primetime games this season.

The #SEC has 10 teams ranked in the Top 50 in defensive efficiency. No other conference has more than 7 (#Big10). Points are hard to come by in the Southeastern Conference.

Since beating the Florida Gators on January 24, South Carolina has dropped four straight games to Texas Tech, Mississippi State, Texas A&M and Arkansas. In those games, the Gamecocks averaged 66 points per game (four PPG below season average) on 35.9% shooting from the field (4% below season average) and 26.9% shooting from beyond the arc (5.5% below season average). In their two most recent losses, SCAR was outscored 164-125. Frank Martin’s teams rely on stringent, physical, in-your-face defense. In 7 of South Carolina’s 11 losses this season, the team has allowed opponents to shoot at least 46% from the field.

Even Chris Silva has struggled (relatively) in the Gamecocks’ string of defeats. The junior forward is averaging 13.5 points, 6.3 rebounds and 0.8 blocks per game on 35.3% shooting from the field and 50% shooting from beyond the arc. Besides three-point percentage, Silva is notching numbers below his season average in all four of the other categories listed above. He also hasn’t recorded a double-double since the last meeting between the Gators and Gamecocks.

South Carolina is shooting 35.9% from the floor and allowing opponents to shoot 39.8% from beyond the arc in their 11 losses this season.

The Florida Gators will follow a similar defensive strategy vs. South Carolina on Saturday afternoon that they used in the first game in January, but it must be tweaked. The Gators packed the paint and doubled Chris Silva in the post the second an entry pass was thrown to him in the two team’s first meeting this season. Because he was immediately doubled, with no preference to whether a guard or forward came to help, South Carolina was left wide open a good portion of time around the arc. Florida’s gameplan was to make the Gamecocks shoot from deep since coming into the game they were, and still are, one of the 50 worst three-point shooting teams in the country. The strategy worked in the paint, as Florida limited South Carolina to 38.2% shooting within the arc, which is 6.6% below their season average. Unfortunately, the Gators got burned from long-range. The Gamecocks sunk 11 of their 21 attempts from downtown as Wesley Myers sunk made 5-pointers en route to a season-high 22 points. Florida’s defensive strategy needs to be tweaked in the sense of who is coming over to double Silva or the other forward/center in the post. By sending their guards to help on the double-team, Florida is taking too much of a risk that bit them in the behind last game. It’ll be interesting to see how aggressively Mike White double-teams the post on Saturday.

Leaders In A Rut

It’s no secret that Chris Chiozza and Kevarrius Hayes are the two vocal leaders of this Florida Gators basketball team. Chiozza, the team’s senior floor general, and Hayes, the team’s only healthy veteran center, are the guys known to speak up on and off the court. Communication wise, Chiozza and Hayes have recognized the need to be more vocal and take a stronger hold of the locker room. On the court, the duo needs to improve as well.

Chiozza is 3-14 from the field and 0-5 from beyond the arc in Florida’s last two games. On top of that, he’s recorded 10 assists to 6 turnovers during that span, far below his season assists-to-turnover ratio of 3.3 to 1. Hayes has only made 9 out of his last 18 (50%) two-point attempts, which is 6.8% below his season average. Florida is 8-0 when Hayes shoots 75% or better from two-point range and an Elite 8-worthy team when Chiozza is at his bet. Getting these two guys out of their recent offensive rut has to be a top priority for Mike White.

Florida is projected as a No. 7 seed in Joe Lunardi’s latest Bracketology released on February 8. The Gators would take on No. 10 Providence in Charlotte in the Midwest Region.

John Egbunu (knee), Isaiah Stokes (knee) and Chase Johnson (concussion) are all still listed as day-to-day, but Mike White offered encouraging news about Stokes at his press conference on Thursday afternoon. White said that Stokes has dropped more weight than expected over the last two weeks and is really watching what he’s eating. He added that trainer Preston Werner is impressed with his progress as of late.

For South Carolina, Tommy Corchiani (knee) is out indefinitely after suffering an undisclosed injury in late January.

Saturday afternoon’s game tips-off at 12 p.m. at Colonial Life Arena and can be seen on CBS with Carter Blackburn and Jim Spanarkel on the call. You can listen to the game on the Gator IMG Sports Network with Mick Hubert and Bill Koss.