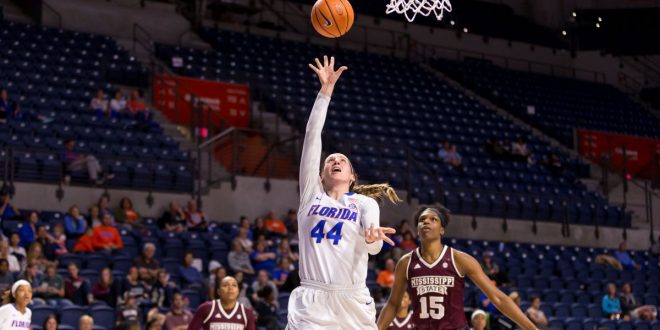 The gauntlet continues for Florida women’s basketball. The Gators travel to Columbia, South Carolina for their fifth straight match up with a ranked opponent. After losing 98-50 to last year’s national semifinalist and second ranked Mississippi State Thursday night, the Gators will take on the team that beat the Bulldogs in last year’s all-SEC National Championship game, the seventh ranked South Carolina Gamecocks.

Playing in the stretch Florida is currently in is no easy task. Not just based on the competition, but also mentally. Every time the Gators step on the court in this stretch, they compete with some of the best teams in the country. This can be mentally draining for a team.

One thing that the Gators have consistently done all season is focus on improving game by game. The Gator faithful really started to see that, especially the way Florida played in Missouri Monday. They had a chance at the end to pull off the upset.

Against Mississippi State Thursday night, the performance Florida showed was more a testament of how talented the Bulldogs are. Mississippi State showed that they are primed for another run to the Final Four. Florida did the best they could to hang with this juggernaut in the first half. In the second half, they just couldn’t keep up.

Gator coach Cam Newbauer was hired to get Florida competing with the best teams in the country. The players believe that the six straight games against those teams will make the program better. One player who adamantly believes that is Florida senior forward Haley Lorenzen.

To close the post-game press conference, Lorenzen said that the program will improve through what the team is going through now.

The Gamecocks’ roster is loaded with talent. Leading the team is senior forward A’ja Wilson. Wilson is averaging a team-high 22.7 points per game this season. She is also averaging 11.5 rebounds a game. Wilson is one of the most dominant players in the conference and will pose a serious challenge for Florida forwards.

However, Florida did a respectable job in slowing down Mississippi State forward Teaira McCowan Thursday night. McCowan finished below average in the scoring department with just 10 points. Florida tried to get in McCowan’s head early by taking charges to draw fouls. Expect the Gators to use a similar tactic against Wilson on Sunday.

Led by head coach Dawn Staley, South Carolina is a well-oiled machine. They are averaging 79.3 points a game on offense while shooting 48.3% from the field. Alongside the previously mentioned Wilson, Gamecocks forward Alexis Jennings is a high-efficiency scorer for South Carolina. She’s averaging 12 points a game with a shooting percentage of 61.2%. Florida will have to keep the ball out of her hands as much as possible. The reason being is that if she gets the ball with the chance to score, she will make Florida pay.

Sunday will be another challenge for Florida, but not one they will shy away from.  Following the loss to Mississippi State, Gators head coach Cam Newbauer was already looking ahead to the South Carolina game.  He said the recent stretch of ranked opponents Florida has faced is what he and his team signed up for.

The Gators hope to knock off the defending champion South Carolina Gamecocks on their home floor Sunday afternoon. Tip-off from Columbia is set for 1 p.m.

Previous Gators Power Through Gamecocks in Columbia
Next No. 2 Gator Softball Defeats No. 18 Michigan and Georgia State