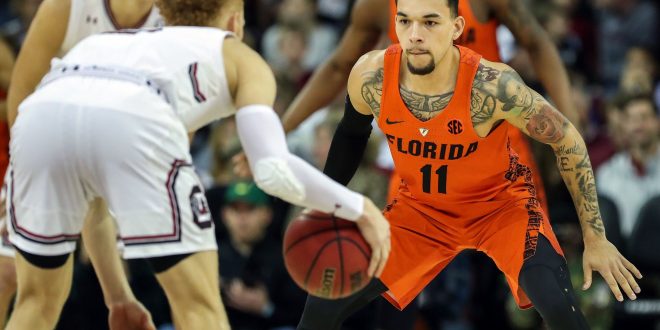 Gators Power Through Gamecocks in Columbia

A dominant 41-point first half propelled the Florida Gators to a 65-41 victory over the South Carolina Gamecocks. Six players scored six or more points on the afternoon for Florida. Less than three weeks ago, the Gamecocks went into Gainesville and won by five. The Gators had different plans in the second meeting with one of their major SEC rivals.

1.) Team Basketball: This was undoubtedly the best team victory of the year. The Gators found other scoring options outside of Hudson, Chiozza, Koulechov, and Allen. While Hudson and Chiozza led the way with 12 points apiece, Florida scored 28 points outside of their core four. This was done on an efficient 9-20 (45%) from the field, including 2-4 from beyond the arc. Mike Okauru led the bench charge with eight points, while Deaundrae Ballard added six of his own.

2.)Pace and Space: The Gators best offense comes from constant movement off the ball. While they only had six fast break points, the Gators moved the ball with flow and consistency in their half-court offense. This resulted in a 41-point first half against a top-40 defensive team in the country. Chris Chiozza relentlessly attacked the paint and found open teammates, who were cutting or setting off-the-ball screens to free up other teammates. Florida’s pace is what allowed them to establish a 21-point lead at the half, and they didn’t look back from there.

3.) Lockdown D: Florida’s defense was absolutely stellar. Interior defense has been a huge issue for the Gators this season, but they recorded 8 blocks in the first half and limited the Gamecocks to 18 points in the paint. South Carolina shot 15-54 (27.8%) overall including 2-13 from three. The Gators also held South Carolina star Chris Silva to 10 points and 5 rebounds. Before this contest, Silva was averaging 14.5 points and 7.7 rebounds per game on 46.4% shooting.

4.) Balanced Offense: Unlike the main storyline of the entire season, Florida didn’t need three-pointers to take down South Carolina. While they shot an efficient 4-8 from beyond the arc in the first half, they didn’t knock down a triple in the second half and finished 4-13 on the afternoon. The Gators have had a lot of trouble winning games this season when their threes aren’t falling. However, this clearly did not impact them at all, easily prevailing by 24 points.

5.) Battle of the Boards: Team rebounding is the best way to rebound. The Gators out-rebounded the Gamecocks 46-24, with 7 different players grabbing three or more boards. Before this contest, the Gators ranked 11th in the SEC with 35.4 rebounds per game. Chris Silva was in foul trouble for a majority of the second half, but Florida still out-rebounded South Carolina 22-10 in the first half. While the Gators only scored eight second chance points, they limited the Gamecocks’ ability to get second chance opportunities with only six offensive rebounds.

White on rebounding, "Just a case of our guys being focused on what they are supposed to do. Have guys block out and go after the ball with two hands." #Gators

The Gators look to extend their winning streak to three as they host the Georgia Bulldogs on Wednesday night. The Bulldogs sit at 4-7 in the SEC and have lost five of their past six game. In that span, their one win was against, you guessed it, Florida. The Gators will look to avenge this loss in similar fashion to their performance vs. South Carolina on Saturday.