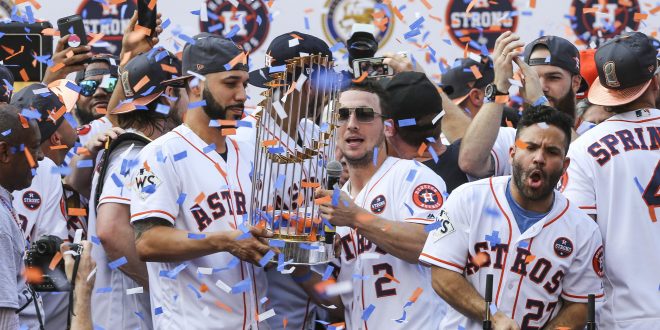 Spring is in the air, which means baseball is too. Spring training is officially underway for the 2018 season. The reigning World Series Champions, the Houston Astros, have been working hard during their off-season. Houston returns almost all of their team that led them to such great success. With their first World Series title under their belt, they look for a repeat this season.

The Astros already have a dominant rotation since acquiring Gerrit Cole from a trade with the Pirates in January. The team also acquired the dynamic duo, Justin Verlander and Dallas Keuchel, last season. Two other powerful players the Astros added are relievers Hector Rondon and Joe Smith. Their biggest loss from last year’s team was the retirement of hitter Carlos Beltran.

Justin Verlander joined the Astros during the trading deadline last year. He has been an incredible addition to the team, helping pave the way for the team’s first championship ring. Verlander considers his team the best of the best, as they are still on a high from their World Series win. However, he stresses that he and the team want to strictly focus on this season.

Two rookies expected to be in the spotlight this upcoming season are Tony Kemp and Derek Fisher. Kemp has been one of the most consistent players for the Astros and has a powerful swing. Outfielder Derek Fisher also made his debut last season and will be competing for playing time this season. Fisher will be competing against Marwin Gonzalez for the spot in left field. Gonzalez could be Houston’s best option however, since he played 47 games there in 2017.