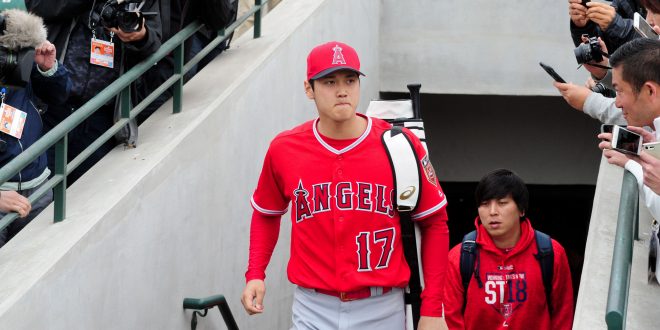 Many claim Mike Trout to be the best player in baseball, but the Los Angeles Angels have a bigger sensation joining the roster. Japanese 23-year-old Shohei Ohtani started training with the Angels Tuesday to kick off spring training. He is a double threat as a strong righty pitcher and a powerhouse on the left side of the plate. He signed with the Angels in December, giving the team hope for a return to October baseball in 2018.

Ohtani before going to Los Angeles

Before he signed with Los Angeles, Ohtani played five impressive seasons in Japan. The two-way star boasts a 2.52 ERA and a .286 batting average with 48 career home runs. Every team in the MLB has been watching him throughout his career in Japan. Before signing with the Angels, he was also considering rival teams, the New York Yankees and the Boston Red Sox. Sam Miller of ESPN writes that Ohtani claims “it’s hard to explain” why he chose LA, but there was “a connection.”

Angels Manager Mike Scioscia praises Ohtani for the variety of pitches he has under his belt as well as his power at the plate. In terms of his adjustment to American and MLB culture, Scioscia says,

“We’re gonna work hard to try to get him ready to go and understand his best stuff and how it’s gonna play on a major league field. But we’re not gonna know until you get there and get into the season.”

Scioscia went on to say that he does aim to get Ohtani into the starting rotation. He also wants him hitting as much as possible.

The MLB Network named Ohtani No. 100 on the top 100 players list. Some expect him to join Albert Pujols with DH responsibilities when he isn’t on the mound, but others aren’t so sure.

In addition to anticipated success in the postseason, Ohtani already brought increased attention and ticket sales to Los Angeles. According to the Los Angeles Times, “barely 24 hours after Ohtani decided to play for the Angels, the team had season-ticket information available in Japanese.”

Angels on their trek to the postseason

In the last nine seasons, the Angels only made one postseason appearance. In 2014, the team was eliminated after a Kansas City ALDS sweep. This year, Ohtani is expected to help the team reach that goal, but Scioscia is also rebuilding his infield. The roster changes point towards an improved offense for the Angels in 2018.

Infielder Zack Cozart is new to the LA roster after signing a three-year $38 million contract. In 2017, Cozart averaged .297 at the plate with 24 home runs. The Angels also gained Ian Kinsler, a second baseman from the Tigers. Kinsler hit 52 RBIs in 2017 with a .311 OBP. On top of two-time American League MVP Mike Trout and expected all-star Shohei Ohtani, Los Angeles offense looks to top the charts.

I grew up in the Washington, DC area and now I'm a Gator. I'll always be learning more about myself, others and the world around me. And I'll always be talking about sports.
@kelsey_godman
Previous Astros Looking For Another World Series Ring
Next Yankees Preview: Stanton-Judge Duo