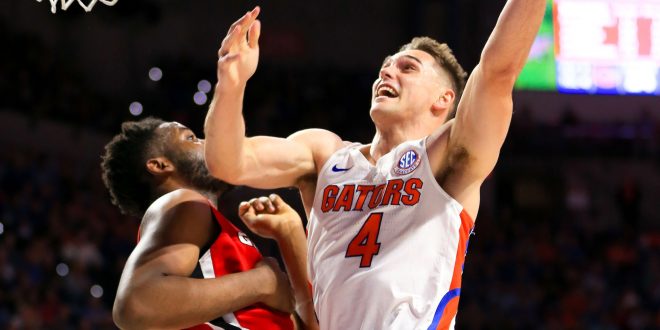 The Georgia Bulldogs defeated the Florida Gators 72-69 on Wednesday night. Florida maintained a comfortable lead throughout a majority of the second half, but Georgia cut the lead to one with just over three minutes left in regulation. The Bulldogs continued this run and sent the game to overtime courtesy of a three by Yante Maten with five seconds left.

Despite the loss, Egor Koulechov and KeVaughn Allen led the Gators with 19 points a piece, while Mike Okauru added 14 of his own. Yante Maten torched the Gators with 23 points and 10 rebounds on 8-17 shooting.

1.) Mike Okauru deserves a more prominent role in Mike White’s rotation. He has received increased minutes recently, and has exceeded all expectations. The freshman continued his strong play with a 14-point performance in 14 minutes of action against Georgia. He shot 5-6 from the field, including 2-3 from beyond the arc. Over his past three games, he has averaged 10.3 points per game. Okauru has provided a nice offensive boost when the Gators are struggling to score the ball, and his defense is more than reliable. As Okauru gains more experience, his impact will continue to grow.

2.) Yante Maten is more than just a scorer. If he can develop a relatively consistent three-point shot, he will be a legitimate NBA player. His post-game is extremely polished, his mid-range game is more than consistent and he rebounds with authority. He is also a very good interior defender and has great vision for a big man. Maten has the ability to pass out of the post and find the open teammate when he is double-teamed. The Gators did a good job of maintaining Maten for 35 out of 45 minutes, but Maten took over when it mattered most. The NBA-bound senior put up 23 points and 10 rebounds on 8-17 shooting. When watching Maten, it is evident that he is head and shoulders above his competition.

Mike White talked about the huge plays that Maten made and called him the best player in the league.

3.) The key to the game was rebounding. The last time these two teams faced off, the Bulldogs won by 12 and out-rebounded the Gators 44-35. The Gators kept the rebounding battle close throughout a majority of the game and maintained the lead. However, Georgia owned the glass for the final five minutes of regulation and overtime, and this was a major factor in their comeback. The Bulldogs ultimately out-rebounded the Gators 44-37 including grabbing 13 offensive boards. Georgia has an average height of a little over 6’6”, which is third in the SEC behind Kentucky and Texas A&M. This size makes them an elite team on the glass. They grab 38.5 rebounds per game, which is 3rd in the SEC.

4.) Allen’s confidence is key for the Gators. The Gators are at their best when he is playing confidently and being aggressive. The junior has taken a step back this year after having a breakout sophomore campaign. However, he certainly did not disappoint against the Bulldogs, putting up 19 points on 6-14 shooting, including 3-5 from three. If the Gators want to have a chance to make noise in the SEC and NCAA Tournament, Allen must play with confidence.

5.) The Gators still lack an offensive and defensive interior presence. Kevarrius Hayes is a top-tier shot blocker, averaging 2.1 per game which is 4th in the SEC. However, he is a slightly above average post defender and has trouble locking up the opposing big man. He is also very raw offensively. Gorjok Gak and Dontay Bassett offer minimal value on both ends of the floor. Keith Stone has been their most consistent big man offensively, but he plays more like a guard with his ability to hit threes and attack the basket off the dribble.

The Gators will head to Nashville to take on the Vanderbilt Commodores on Saturday afternoon. The Commodores sit in last place in the SEC at 4-9, but have won two of their past three games.