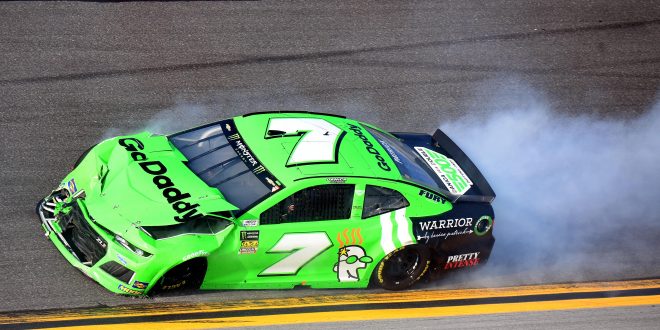 Patrick Crashes out of Final Race

It wasn’t the way Danica Patrick wanted to go out.

Athletes dream of winning the big game, match or race and riding off into the sunset.

That didn’t happen for Danica Patrick, the most accomplished and inspirational female driver in racing history.

Patrick, 35, crashed out of the Daytona 500, her final NASCAR race, on Sunday. She intends to compete in the Indianapolis 500 in May and retire.

Patrick was driving in the middle of the pack on lap 101 of 200 when a multicar crash involving stars such as former Daytona 500 winner Kevin Harvick, Kasey Kahne and pre-race favorite Brad Keselowski occurred at the front. She was unable to escape the spinning car of Chase Elliott and smashed the front of her number seven Chevrolet. The damages were too substantial for her to continue.

Another BIG one. #DAYTONA500 https://t.co/q5ThlqQpPF

While disappointed that she didn’t receive a “storybook” ending, Patrick says she hopes she is remembered for her extraordinary career and not just how it ended.

Patrick made her IndyCar debut for Rahal Letterman Racing in 2005. Perhaps fittingly, she crashed out of her first race as well.

However, what she did in between was nothing short of iconic.

In 2007, Patrick joined Andretti Green Racing, and at the Indy Japan 300 in 2008, she secured her first career victory. By doing so, she became the first woman to ever win a sanctioned open wheel car race.

Patrick set the IndyCar Series record for most consecutive races finished in 2010 with 29.

Eager for a new challenge, Patrick switched to stock car racing full time for the 2012 season.

Patrick began in the Nationwide Series (now called the Xfinity Series), a minor league of sorts for the Sprint Cup Series (now Monster Energy Series). She also competed in ten Sprint Cup series races for Stewart-Haas Racing in 2012, including the Daytona 500. Patrick crashed out of her first Daytona 500 on the second lap.

She made history in 2012 by becoming the first woman since 1994 to hold the pole position for a NASCAR race.

Patrick’s highest finish in a Cup Series race was fourth place, which she accomplished in 2017.

Her NASCAR career was rather unsuccessful, at least in terms of wins and losses. However, Patrick broke NASCAR’s gender barrier and accomplished many firsts for women in stock car racing. When viewed this way, Patrick’s career was unprecedented, historical and iconic.

In addition to Patrick’s racing accomplishments, she is also well-known for her various acting roles, her partnership with GoDaddy.com and her immense popularity. Patrick has appeared in more Super Bowl commercials than any other celebrity, and, at her peak, was one of the most popular female athletes in the world. Races that Patrick competed in saw a spike in ratings.

However, most significantly, she inspired young girls to follow their dreams and pursue careers in motorsports. NASCAR legend Jimmie Johnson tweeted that Patrick has meant a lot to his young girls.

Thank you @DanicaPatrick for being a strong role model to the little girls in my life. It was an honor to race with you in your last #DAYTONA500 . #StrongIsTheNewPretty pic.twitter.com/KSIsGGsaSw

Her NASCAR career may not have ended the way she wanted it to, but Danica Patrick’s impact on the racing industry will endure.