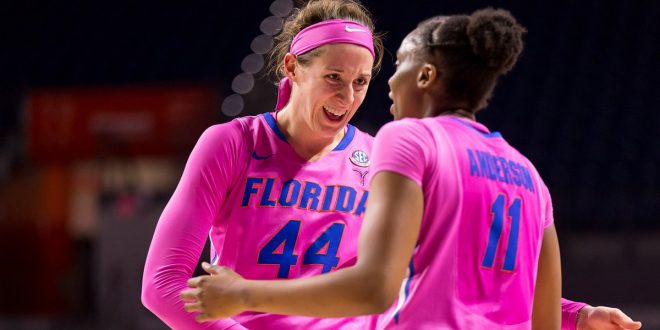 Following their convincing win over Vanderbilt on Senior Day, the Florida Gator women’s basketball team expressed confidence in taking on any opponent. Gators head coach Cam Newbauer even said that his team is better than what the record shows. This confidence stems from the six-game stretch where Florida took on and competed with six straight ranked opponents. Some of which are considered to be some of the best in the country. Florida will end the regular season facing two more ranked opponents. The first of these two games will be the final home game for the senior class when the Gators host bitter rival, No. 15 Tennessee.

The confidence for this Gator team has grown at a steady pace this season. Game by game, the Gators have shown improvement. This is evident when everything came together in the win over Vanderbilt Sunday. The Gators slowed the pace down to get good quality shots. They crashed the boards harder than most teams in the SEC have done this season. The Florida shooters were on fire from beyond the arc. This has become the formula for this Gator team to get a victory.

This confidence stems from the infamous six-game stretch Florida had to go through, playing some of the best teams in the country. They went toe to toe with these teams and it shows that they can play with anyone.

Short term, it was frustrating to have all those close losses where if things could have gone a tad different in the game’s final quarter, the story would’ve been different. In the long term, however, the Gators have acquired a confidence that will serve them well these last two games and head into the conference tournament with a sense that they can compete with anyone.

Newbauer explained the secret to the team’s rise in confidence.

Development of the Future

Florida’s depth at the forward position lacked experience at the start of the season. Freshmen Mikayla Hayes and Jalaysha Thomas were tasked with being thrown into the rotation from the very beginning. They weren’t given the year to grow and develop behind the scenes. The two had to do so in game situations where their learning mistakes would be magnified. Both Hayes and Thomas made the best of what could be a difficult situation for young players. The two have shown progress since the season started in November.

Hayes said she learned to be a more versatile forward this season.

The two freshmen had the unique opportunity to learn from two prolific forwards. Hersler said that herself and Lorenzen took on the role of helping the two grow as players.

There are a few teams in sports where when they come to your stadium or arena, its a big deal regardless of record. Some of these teams include the New York Yankees in Major League Baseball, the Pittsburgh Steelers in the National Football League and the Tennessee Lady Volunteers in women’s basketball.

The Lady Vols are a storied program in this game, due in large part to the success of the late great Pat Summitt. The foundation Summitt laid in Knoxville can still be seen today. Now led by head coach Holly Warlick, Tennessee remains one of the more talented teams in the country.

The Lady Vols hit the jackpot with last year’s recruiting class. They signed three high school stars who have become stars in college. Freshmen guard Jaime Nared leads the team in scoring, averaging close to 18 points a game. Fellow freshmen guards Rennia Davis and Evina Westbrook have proven to be strong contributors to the team.

Tennessee’s youth brings speed that will try to pick up the pace against the rival Gators to prevent Florida from going at their own pace.Newbauer said shot selection will be a major factor in Thursday’s meeting with Tennessee.

In her final home game in a Gator uniform, Lorenzen faces another familiar opponent. She will be tasked with defending Tennessee senior center Mercedes Russell. Russell is an extremely efficient shooter in close. Her 6’6″ size poses a mismatch for the 6’3″ Lorenzen. Lorenzen has been in this situation several times this season and has been able to hold her own.

Newbauer said his team is up for the challenge of playing Tennessee, a program rich with tradition and success.

Lorenzen received another honor in her senior season. She was named to the SEC Community Service Team Wednesday. Lorenzen is involved in several non-profit organizations that serve to mentor elementary school students and help children at UF Health Shands.

The Gators host the rival Tennessee Volunteers Thursday night. This will be the final home game for the senior class. Florida hopes to capture its first win over a ranked opponent this season. Tip-off from Exactech Arena is set for 7 p.m.