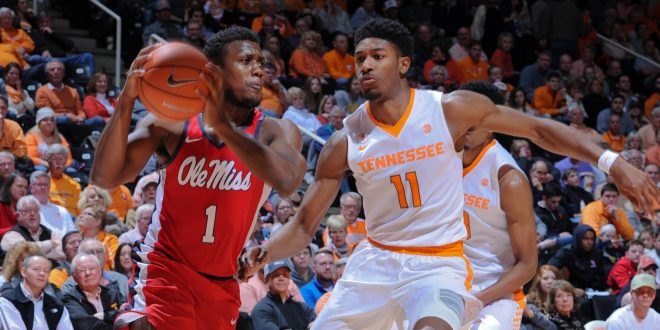 Unranked Ole Miss hosts no. 19 Tennessee Saturday as SEC play starts to dwindle down.  Ole Miss is struggling to compete in the conference- the team only has five wins.  Tennessee, on the other hand, is sitting in second place and continues to dominate in the conference.

The Vols seem to have come out of nowhere this season.  In the 2016-2017 season, Tennessee won 16 games and lost 16 games.  Out of those wins, the Vols only won eight SEC conference games.

Now, in this season, Tennessee has won 20 games and only lost seven.  In those 20 wins, 10 have come against SEC opponents.

The team is averaging about 75 points per game and only allowing opponents to score 67 points.

Another area Tennessee is succeeding in is coaching.  The Vols’ head coach Rick Barnes has been named a semifinalist for the Naismith Men’s College Coach of the Year Award.

Coach Barnes is in his third season as Tennessee’s head coach and the last two seasons have been completely different.

This season, Coach Barnes and his team found what clicks and is riding the success train.  The last time the Vols made it to the NCAA Tournament was the 2013-2014 season where the team lost in the semifinals.

Ole Miss Falling Behind in the SEC

Ole Miss has only won five conference games, but the team is coming off of an overtime win against Missouri.

The Rebels’ head coach Andy Kennedy stepped down Feb. 18 after deciding he was leaving at the end of the season.  After a tough loss to Mississippi State.  Kennedy was the winningest coach at Ole Miss with a record of 255-153.

Assistant coach Tony Madlock stepped up and took over the coaching position and it proved to be the right call for Ole Miss.

Breein Tyree scored 25 points in his last game.  The sophomore guard was averaging 10.3 points per game, but the last two games he’s played in, he’s been on fire.

This game is the first time in six weeks that the Rebels are home for a weekend game.  Home court could be a huge advantage for a changing Ole Miss team.

In the last nine matchups against Tennessee, Ole Miss has won six of them.

Where, When and How to Watch?

These two teams will face off in The Pavillion at Ole Miss.

Tip-off is set for noon on Saturday.

The game will air on the SEC Network.

Nicolette is a senior at the University of Florida who has participated and enjoys reporting on all things related to sports.
Previous Preview: No. 1 Florida Baseball Travels to Miami for First Road Test
Next SEC Basketball Preview: LSU at Georgia