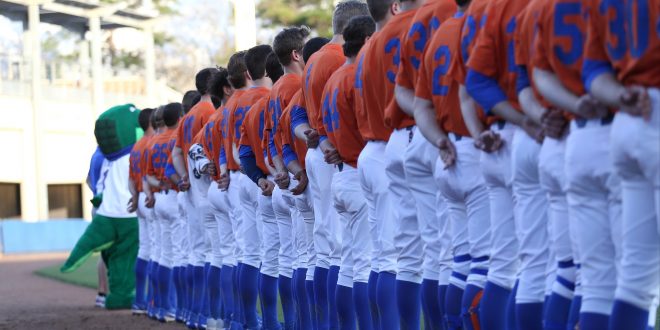 The No. 1 Florida Gators (5-0) have been on a roll to begin their season. This weekend the undefeated Gators hit the road for the first time to take on the Miami Hurricanes (2-2). Florida baseball is 120-128-1 all-time against Miami, but they’re 27-11 under head coach Kevin O’Sullivan.

The trip should serve as an early-season challenge for his group. “It’ll be a lot of firsts for a lot of guys being on the road.” O’Sullivan said. “We’re playing against a very good team.”

The Hurricanes are led by head coach Jim Morris. He’s in his 25th and final season as the leader of Miami’s baseball team.

O’Sullivan complimented Morris and the job he’s done in Coral Gables. “He’s got a couple of national championships and he’s coached two great schools in Georgia Tech and Miami,” O’Sullivan said. “It’ll be good to see him and obviously he’s had a hall of fame career.”

O’Sullivan said the Gators have some familiarity with Miami’s pitching, but added there are a lot of fresh faces on this Hurricanes team.

If Miami is to find success against the Gators they need to rely on the bat of junior Danny Reyes. He’s hitting .571 this season with 1 HR and 4 RBI.

The Gators have gotten off to a torrid start offensively. They’ve averaged 9.8 runs per game through their first 5 matchups. Nelson Maldonado, JJ Schwarz and Wil Dalton have been leading the way.

Maldonado said the Miami series is always competitive. “It means a lot to us and we’re going over there with our heads held high.” Maldonado said.

Schwarz said it feels good to get off to a good start. He hopes he and his teammates can carry the momentum into Miami.

Schwarz added that the environment at Alex Rodriguez Park can get crazy because the fans stay on the opposing team throughout the entirety of a game.

Florida will be looking for their talented stable of arms to deliver a performance similar to the one it produced against Siena. In the Gators’ opening series, the combination of Brady Singer, Jackson Kowar and Tyler Dyson went a combined 3-0, threw 20 innings and surrendered only 3 earned runs.

We’ll have coverage of the series throughout the weekend on ESPN 98.1 FM & 850 AM WRUF.