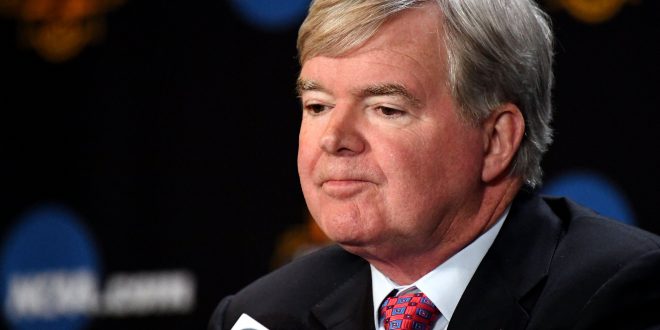 Documents released last week from the FBI’s investigation into the corruption of men’s college basketball showed that players from more than 20 Division 1 schools possibly violated NCAA rules. On Saturday, NCAA President Mark Emmert emphasized the importance of making changes to the current rules of the NCAA.

With NCAA Tournament Selection Sunday on March 11th, Emmert said that he hopes the NCAA has a better understanding of the eligibility for current players affected by the FBI investigation. He also says that by the start of the 2018-2019 season he wants to see changes being implemented.

FBI wiretaps intercepted calls between Arizona Wildcats head Coach Sean Miller and sports agent, Christian Dawkins. The calls are reportedly discussed paying current Wildcat star, Deandre Ayton, $100,000 to ensure that he signed with Arizona. No other piece of information was as jaw-dropping as this one. Ayton’s attorney claims that the allegations are untrue and demands that his name be cleared by the university as well as the NCAA.

President Emmert made the choice to exclude himself from the decision to hold either Coach Miller or Ayton accountable for the allegations. During an interview with CBS, Emmert said, “First and foremost, that a decision the school has to make. We don’t reach in and tell a school that a player can or can’t play tonight, unless there is an open investigation going on that’s already been through a whole process. There’s been no process here. We’ve got a report in the media. I’ll let everyone make their own determination on the credibility of that.”

The university released a statement Saturday that Miller would not coach Saturday’s game against Oregon. However, the statement said that Ayton was completely eligible to play.

With this FBI news, President Emmert now believes the practices and rules of the NCAA must change with the times.

“Some of our rules have been from [a] different age, and it’s reached a crescendo. We need to go in and look at the rules and see how it fits for current context. We’re really serious about making really systemic change starting with spring and going forward.”

Many college basketball fans want to know why it took an FBI investigation for the NCAA to reconsider its old-school rules. Mark says that the NCAA is constantly trying to seek out information like this. However, no one has the ability to uncover hidden information like the FBI does.

Plenty of people in the basketball world had no problem giving their opinions regarding the recent breaking news. Legendary college basketball coach and ESPN broadcaster Dick Vitale says that paying players would actually help clean up the sport.

“[The NCAA is] making zillions of dollars. Why not allow it?” Vitale said, adding: “Let them get paid. I really believe that in my heart, because this has gotten totally out of control right now.”

Dickie V speaks out on the FBI probe in college basketball. pic.twitter.com/qZDe4qKQRw

Emmert explains that the rules now allow more contact and more interaction with baseball and hockey athletes, because of the nature of their drafts. It makes sense to him that the rules should be very different than they are right now and that is something they plan on talking about.

The school presidents and athletic directors stand at a crossroads. Can they build a new system that helps them avoid these kinds of scandals in the future? What must be part of the conversation is determining if the act of paying college athletes is actually a bad thing.