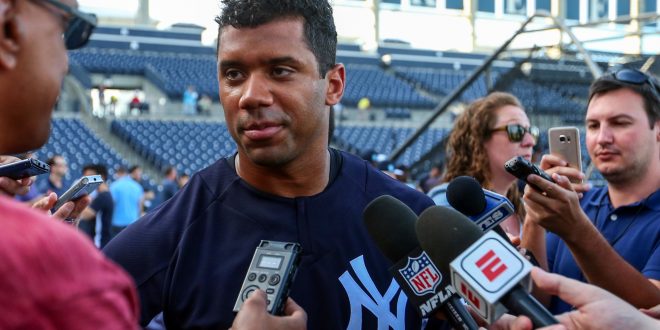 Yes you heard that right. Russell Wilson has been traded to the New York Yankees. No, not from the Seattle Seahawks, but from the Texas Rangers. Wilson spent 5 years with the Texas Rangers before being shipped to New York on Wednesday, February 7th. The superstar quarterback actually has a very reputable background in the baseball and has been playing it since he could pick up a ball.

You might have been unaware, but this is not the first time Russell Wilson has attended spring training. The quarterback from Seattle has quite the history in the sport. In 2007, out of high school he was drafted 41st overall by the Baltimore Orioles. He declined that offer and elected to go play football at N.C. State instead. In 2010, Wilson was drafted again. This time by the Colorado Rockies where he spent two seasons in their farm system playing as a second baseman for minor league teams Try-City Sun Devils and Asheville Tourists.

However, after two seasons Wilson wanted to stay with football. He continued his college football days at Wisconsin for the 2011-2012 season and in April of 2012 he was drafted by the Seattle Seahawks in the 3rd round (75th overall).

In 2013, the Texas Rangers drafted Wilson in the Rule 5 Draft. A rule that allows teams without a full 40-man roster to select certain non-40-man roster players from other clubs. The idea was mainly to have Wilson come to spring training and gain some experience and publicity for him and the Rangers.

Since 2013, Wilson’s rights as a baseball player belonged to the Rangers. That was until 2 weeks ago when the Rangers traded Wilson to the Yankees for future considerations.

After being shipped to New York on February 7th, Wilson started spring training with the Yankees on Monday. And he looked impressive in his first day.

Wilson hit 3 home runs in batting practice and looked good in the infield fielding balls and working on turning double plays. There is no possibility of the Seahawks star quarterback playing baseball. At least not while he is still putting the pads on and playing on Sundays. Now, this is not going to be a Bo Jackson or Deion Sanders story by any stretch of the imagination. However, Wilson has always dreamed of playing baseball and wants to stay as close as he can to a spot that he loves.

Wilson, for at least the next month will be mixing it up on the diamond with the likes of Aaron Judge, Giancarlo Stanton, Gary Sanchez, and Aroldis Chapman.

If Wilson, for any reason, decides to hang up his helmet and shoulder pads he’ll have a pretty good fallback job.

@@michael_sports5
Previous The Missouri Tigers and Vanderbilt Commodores Both Seek a Win
Next J.D. Martinez is ready to go with the Boston Red Sox