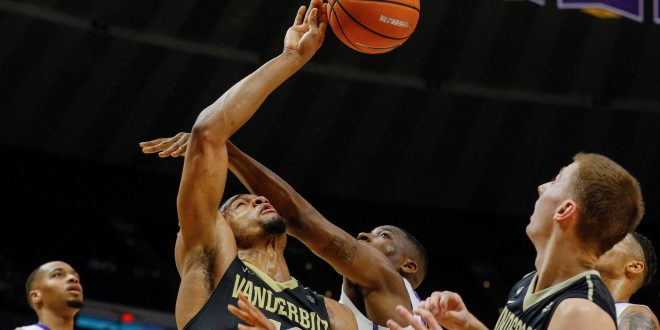 The Missouri Tigers and Vanderbilt Commodores Both Seek a Win

With just two games left in the regular season, Missouri and Vanderbilt face each other for some SEC action on Tuesday, Feb. 27.

The Missouri Tigers went from a five-game win streak to a three-game losing streak this past month. Their most recent bad luck was their 87-66 deficit against Kentucky. After trailing by 12 going into halftime, the Tigers were not able to recover. During that matchup, Graduate Transfer guard Kassius Robertson was able to lead Missouri’s offense with 26 points. Senior Jordan Barnett added 15 points in addition to Junior Kevin Puryear’s nine points.

Record-wise, Missouri is the third most improved team in the country (18-11). Robertson is No. 1 in the SEC for three-point field goal shooting; he is also fifth in SEC points per game.

Last season, the Tigers defeated the Commodores, 72-52. With Missouri’s desperate need for a win and the great talent on the team, the Tigers are looking for a win.

The Commodores currently have an overall record of 11-18. While they are second to last in  SEC rankings, Vanderbilt has shown major signs of improvement. In their last three league home games, the Commodores have locked in wins. Vanderbilt has been able to grab wins this season against teams such as Mississippi State and Florida in just this month.

Senior guard Riley LaChance is Vanderbilt’s best offensive weapon. LaChance averages 15.1 points-per-game during the Commodore’s SEC schedule. In addition, Senior forward, Jeff Roberson has proved his worth for Vanderbilt. The senior forward averages 18.4 points per SEC game is tied for fifth best in the conference.