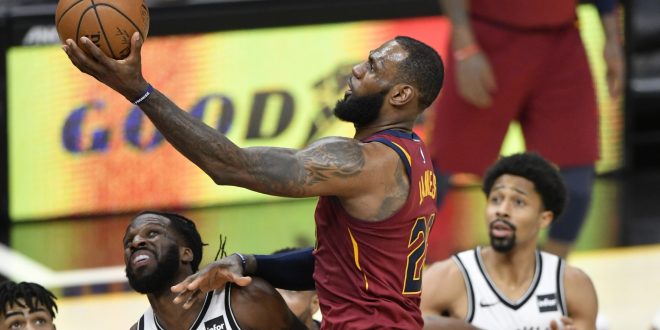 With a 129-123 victory over the Brooklyn Nets on Tuesday night, LeBron James added two more impressive statistics to his resume. He became the only player in NBA history with 30,000 total points, 8,000 rebounds, and 8,000 assists.

LeBron James became the first player in NBA history with 30,000 points, 8,000 rebounds and 8,000 assists tonight. The Cleveland crowd is serenading him with a "MVP, MVP" chant.

He also became the 4th player in NBA history to record a triple-double for an entire calendar month (minimum of 10 games). LeBron typically does not let the media see his excitement about his individual accomplishments, but he was certainly enthusiastic about his most recent achievements.

“With the long list of so many great players that have come through this league, in the history of this league, for me to be the only (person) in a category, I think it’s pretty cool,” LeBron said.

“Scoring has always been last for me. I’ve never looked at myself as a scorer. But to know the history of the game and seeing the guys that put up triple-doubles on a regular (basis) from Jason Kidd to Magic Johnson to Oscar Robertson to Russell Westbrook, you can throw my name in there as well.”

LeBron has passed Wilt as the oldest player in NBA history to average a triple-double over a calendar month. pic.twitter.com/imWgcpMSKC

The Nets had seven players with double-digit scoring on the evening. They were led by D’Angelo Russell, who posted 25 points, 5 rebounds and 6 assists.

The Cavaliers shot 12-24 from beyond the arc and forced 13 Brooklyn turnovers. They also out-rebounded the Nets 55-36, including grabbing 14 offensive rebounds.

Cleveland is now 36-24 on the season and sit in 3rd place in the Eastern Conference.