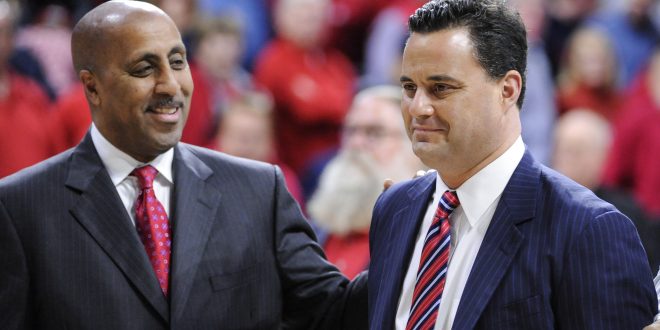 Arizona men’s basketball coach Sean Miller has returned to his position after a short hiatus.

Miller was rumored to be on his way out after reports surfaced tying him to a recruitment-payment scheme.

An ESPN report with unnamed sources alleged that Miller had been in contact with Christian Dawkins, an ASM Sports employee, about paying DeAndre Ayton to attend the University of Arizona.

According to the report, an FBI wiretap caught Miller making contact with Dawkins on separate occasions in regards to paying a reported sum of $100,000 to Ayton.

In Thursday’s press conference, Miller clearly disputed these claims and labeled the reports defamatory to both Ayton and himself.

Miller went on to deny doing anything that violated any NCAA rules, specifically saying that he had never paid any recruits to attend Arizona.

As a result of the allegations, Miller played no part in the Wildcats’ away game at Oregon. The Wildcats ended up losing 98-93. However, Miller was back for the Wildcats’ home game against Stanford. The Arizona fans proved that they backed the long-term coach, giving him a standing ovation when he walked onto the court 20 minutes prior to tipoff.

Sean Miller received a standing ovation from Arizona fans before his first game since reports tying him to an alleged pay-for-play scheme. pic.twitter.com/sI5rNShjck

Miller found the loyalty of the Tucson fans very emotional. He said he would never forget that moment.

With Coach Miller back at the helm, the Wildcats won 75-67. With the victory, the Wildcats clinched, in the very least, a tie for the Pac-12 regular-season title.

Arizona has the opportunity to win the title outright with a victory over Cal or a USC loss.

The Wildcats will take on Cal Saturday at 6:30 p.m. Later that night, the Trojans will take on the UCLA Bruins at 10:15 p.m. to determine the fate of the 2017-18 Pac-12 regular season championship.