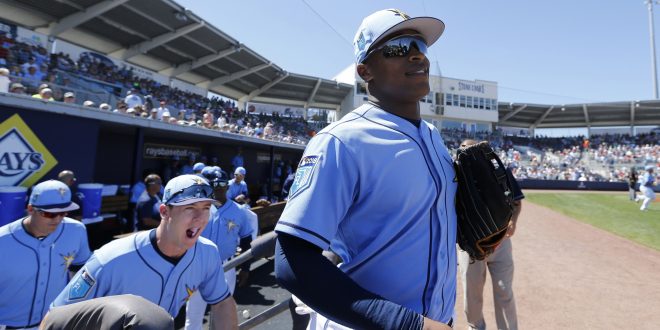 It’s not every day that an individual gets to chat with an MLB player about college sports. Mallex Smith of the Tampa Bay Rays would open up about not just the mentality of the team heading into 2018, but how he is also a fan of the Florida Gators.

So naturally, the first topic of conversation when Smith revealed being a Gator fan was the College World Series national championship win last year. As a recruit of head coach Kevin O’Sullivan, he holds deep ties to Florida.

“I’m a Florida Gator at heart,” said Smith. “It’s about time we got one in there!”

While committing to Florida, he would never don an orange and blue jersey because of being drafted. The sense of joy for Smith when they won the championship, however, was felt because of the relationships he has with certain members of the team.

Not only is Smith happy for the Gators’ first championship in baseball, but he also is paying close attention to the upcoming NCAA March Madness Tournament, hoping the Gators are going to be able to make some noise.

“I just hope they can make it to nationals,” said Smith. “When you attend UF and you’re not winning, you’re not getting much love.”

Smith also spoke about how he is “hoping they can compete and make it deep into playoffs.”

While he’s slinging hits during spring training and wanting to work on his defense, he is sticking by the Gators.

So while Smith is in Tampa Bay, deep down he knows that he is orange and blue. He is a member of one of the greatest nations in college sports: The Gator Nation. Here’s to Mallex Smith being a part of the boys of ol’ Florida, while playing in Tampa Bay.

Stephen Cabrera is a current University of Florida Journalism student and fan of football, basketball, mixed martial arts and professional wrestling.
@IAmStCa
Previous Barrera says he owes it to the fans to get a rematch against Bivol
Next Florida Ready for SEC Tournament Opener Against Arkansas