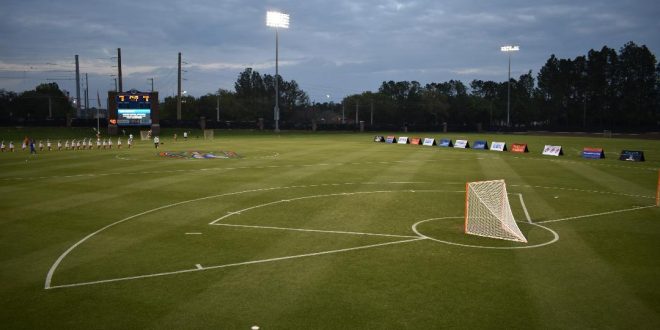 Gator Lacrosse Comes From Behind in Top-10 Matchup

In their return home, the Florida Gators defeat the Navy Midshipmen. Turning up the heat at the end, the score was a 19-16 victory for Florida.

After Florida would allow Navy to score five unanswered goals, the Gators turned to Allie Pavinelli for their first score of the game.

Florida finally strikes back, with a goal from Allie Pavinelli putting @GatorsLAX down by four, score 5-1 with 19:54 left to play in the half. #FLax

A familiar face would help the Gators score their second point of the game, thanks to Grace Haus. Navy would come back strong right after, but Florida would not quit in this one. Madi Hall and Pavinelli would help Florida get on the board once again, before turning to Shayna and Sydney Pirreca.

Florida @GatorsLAX scores just before the half thanks to Sydney Pirreca. Score is 11-8 with @NavyWLax leading. 29.7 seconds left in the half. #FLax

The Gators would turn it on in the second half. Going for two unanswered goals, thanks to Pirreca and Pavinelli. After a few more goals from Navy, the Gators put their foot on the gas. Caroline Benitez and Shannon Kavanagh. Kavanagh would score four goals in a row to put the Gators on top in the second half.

The lead is extended once again as Shannon Kavanagh gets her fourth goal of the day, as @GatorsLAX leads @NavyWLax 19-16 with 1:18 left in the game. #FLax

The Gators would have a solid back-and-forth effort against Navy, but the late rally would put them over their No. 10-ranked opponents at home.

Coming off this big victory, the Gators now look ahead to a road trip on Sunday. They will visit the Vanderbilt Commodores in Nashville in only their second non-ranked opponent. Opening draw will take place at 2 p.m., and the game will be streaming live on Facebook Watch.