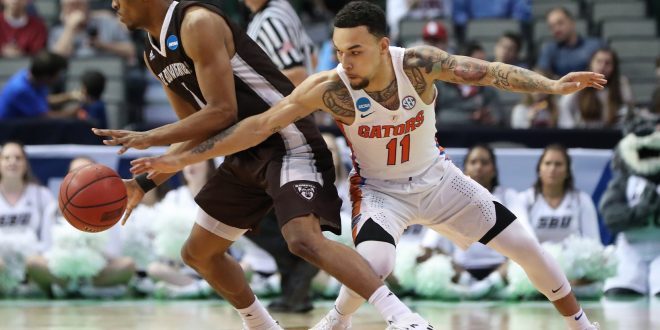 Florida Steamrolls Past St. Bonaventure in the Round of 64

For the second straight year, the Florida Gators advanced out of the Round of 64 by defeating the St. Bonaventure Bonnies 77-62 with a dominant second half. Egor Koulechov led the charge with 20 points and six rebounds, while Jalen Hudson added 16 points. Chris Chiozza had a typical Chris Chiozza type of night, posting eight points, 11 assists and no turnovers. Courtney Stockard paced the Bonnies with 14 points and 6 rebounds before fouling out.

1. The Gators Locked Down the Bonnies

The Bonnies have an offensive efficiency of 111.6, which is the second-best in the Atlantic 10 and 63rd in the nation. The Gators held them to 17-48 (35.4%) from the field and 3-19 (15.8%) from beyond the arc. The Gators put all of their defensive focus in shutting down Jaylen Adams and Matt Mobley, who combined for 21 points on 5-19 shooting. Adams, the co-Atlantic 10 player of the year, averaged 19.4 points and 5.3 assists per game on 43.9% shooting and 44.4% from beyond the arc. Mobley averaged 18.4 points per game and was named a First-Team All-Atlantic 10 player. When the Bonnies beat UCLA in the play-in game, the Bruins tried the same tactic. However, UCLA had no answer for Courtney Stockard, who posted a game-high 26 points. The Gator defense prevented Adams, Mobley and Stockard from blowing up and the Bonnies were unable to produce much offense.
Chris Chiozza mentioned how Florida’s stellar defense led to easy buckets on the offensive end in the second half.

2. The Gators Need Their Scorers to Score

Jalen Hudson and KeVaughn Allen are the two X-factors for the Gators if they want to go far in the tournament. Hudson got hot in the second half and finished with 16 points on 6-14 shooting, but Allen struggled with only 7 points on the evening. The Gators have five legitimate scoring threats in Jalen Hudson, KeVaughn Allen, Egor Koulechov, Chris Chiozza and Keith Stone. Even when Chiozza, Koulechov and Stone are struggling to score, they still bring numerous positive attributes to the court.

Head coach Mike White discussed how important it is for the team to find balanced scoring.

3. Chiozza is a lockdown defender, elite playmaker and a high-quality rebounder for someone under 6’0”

Koulechov is a very good defender and leads the Gators in rebounding. Stone plays above average defense, rebounds at a solid rate and scores at all three levels of the defense. With Allen and Hudson, they don’t bring much to the team outside of their scoring. They have the ability to go for 30 points on any given night, but when they aren’t aggressive and/or their shots aren’t falling, they struggle to contribute. If the Gators want to advance deep into the tournament, they need Allen and Hudson to score with consistency.

4. It Was a Tale of Two Halves for the Gators

Chris Chiozza is Such an Elite Playmaker. Chiozza has always been known as a pass-first point guard, but has never been this dynamic of a playmaker. He had 11 assists against St. Bonaventure, seven of them coming in the second half. Chiozza was the reason why the Gators went on a scoring tear after the intermission. The Bonnies 2-3 zone gave the Gators fits in the first half, but Chiozza’s ability to infiltrate the zone and create open opportunities for his teammates was the reason why the Gators scored 50 second-half points.

Mike White articulated how important Chris Chiozza is to this team and what he brings on a nightly basis.

They only turned the ball over nine times in the contest, but three of those turnovers came in the final 2 minutes of action. The Bonnies forced 14.5 turnovers per game this season, and forced 20 turnovers (which led to 30 points) in their win against UCLA in the play-in game. The Gators have done a great job of taking care of the ball all season long. They average 9.8 turnovers per game, which is the fewest in the SEC and ranks 7th in the nation.

The Florida Gators will take on the Texas Tech Red Raiders in the Round of 32 on Saturday at 8:40 p.m. (Eastern).

Previous No. 2 Gator Softball Goes on the Road to Take on No. 10 Georgia
Next No. 11 Loyola-Chicago Buzzer-beater Upsets No. 6 Miami