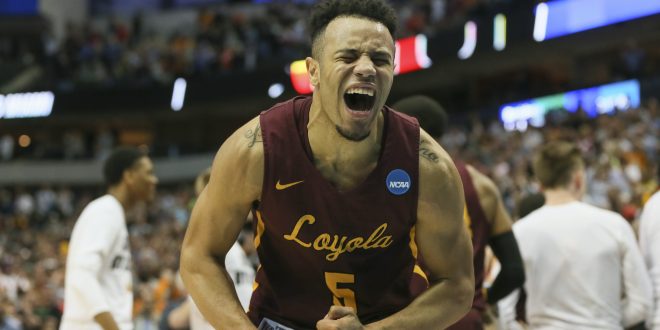 No. 11 Loyola-Chicago Buzzer-beater Upsets No. 6 Miami

Loyola-Chicago dazed the University of Miami and disqualified many fan brackets during Thursday’s NCAA Tournament first round. The South Region No. 11 seed Ramblers topped the No. 6 seed Hurricanes 64-62 with a Donte Ingram 3-point buzzer-beater. It was the first NCAA Tournament appearance for Loyola-Chicago since 1985 when Georgetown eliminated Loyola-Chicago in the Regional Semifinals.

The game was tied at the half, 28-28, and Loyola trailed close behind Miami for a majority of the second half. Miami’s lead scorer, Lonnie Walker IV, missed a single free throw to give Rambler Ben Richardson the defensive rebound at nine seconds to go. With three seconds on the clock, Marques Townes passed to Ingram several feet past the top of the key. Without taking a step forward, Ingram’s 3-point splash hit the net just as the clock hit 0:00.

Ingram credited Townes for passing to him in that moment, commenting,

“I thank Marques for making that pass. Any one of us could’ve hit that shot, but I was just fortunate enough to be in the position. When I see the shot and I had space I was confident in it.”

Custer noted that it wasn’t just a lucky shot, stating that Ingram made essential athletic shots all season. He also made expressed his confidence in the team’s ability to advance with strength throughout the tournament.

The Hurricanes on the court

Miami was favored to win from the beginning. Throughout the game, the Ramblers were a little too close for comfort, but Miami maintained a lead and looked confident deep into the second half. Miami’s offensive statistics were similar, also with four reaching into double digits. Walker hit 12 points, while Ja’Quan Newton and Dewan Huell scored 11 and Chris Lykes totaled 10.

Before the game, Miami head coach Jim Larranaga said that he wasn’t going to take Loyola-Chicago lightly. Loyola-Chicago has impressed him all season, including an pivotal road victory over the Florida Gators. On Tuesday he said,

“For our players and our staff the major concern is, anybody that can go on the road and win in Gainesville in the non-conference and beat the University of Florida on their home court–that says an awful lot about their capability. And you can tell when a team goes 28-5 how good they are.”

The talent Larranaga mentioned ultimately overcame the Hurricanes during the round one upset.

Loyola-Chicago came into Thursday’s game with a Missouri Valley Conference championship title and a 10-game winning streak. Moving forward, the Ramblers look to extend the now 11-game run deep into the postseason. Loyola-Chicago will take on the Tennessee Volunteers in the second round on Saturday.

I grew up in the Washington, DC area and now I'm a Gator. I'll always be learning more about myself, others and the world around me. And I'll always be talking about sports.
@kelsey_godman
Previous Florida Steamrolls Past St. Bonaventure in the Round of 64
Next Preview: No. 2 Florida Baseball Opens SEC Play Against South Carolina