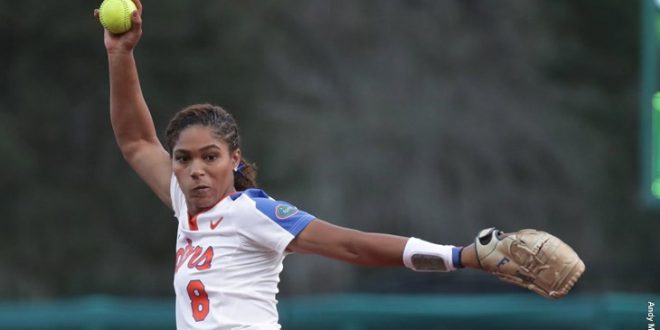 Gator Softball Picks Up Win Over Georgia in Series Finale

Florida softball dropped its first series of the season this weekend after losing Games 1 and 2 of their three-game series against Georgia. Game 1 featured a Georgia walk-off two-run home run while Game 2 was an 11-1 beat-down that ended in just five innings. However, the Gators were able to finish the weekend strong and leave Athens with a 5-1 win in Game 3.

Prior to this weekend’s matchup, Florida had won 13 consecutive SEC series.

Pitcher Aleshia Ocasio was lights-out in the circle for the Gators and played a big role in the team’s success on Sunday. Ocasio improved her record to 10-2 after throwing all seven innings and allowing just four hits, no walks, and striking out nine.

The Bulldogs didn’t pick up their first base runner until there were two outs in the fifth inning. But Ocasio was able to produce a pop fly to end the inning and never allow the runner to advance.

Georgia threatened again in the sixth, but Ocasio was again able to escape the jam.

B6 | @AleshiaOcasio and the Gators bounce back to record three-straight outs! Florida maintains a 2-0 lead over the Bulldogs.

It wasn’t until the seventh when Georgia earned its first and only run of the game after a couple of hits and a fielding error by the Gators.

“I think Georgia is as good of a team that we have seen all year long swinging the bat. Aleshia really did an outstanding job, going out and limiting them to probably only two hard hits all day long. We fought, we really fought today at the plate, but I really give Aleshia credit. She was the extra bat in the lineup, I felt like we were batting ten today instead of seven because she pitched such a great game,” said Walton.

After being held to just one run the previous day, the Gators’ offense was back on track on Sunday.

A two-run Amanda Lorenz home run in the seventh highlighted Florida’s offense on the day.

Jordan Matthews got the scoring started in the first inning with an RBI double that was lost in the sun and misplayed by the Georgia defender. A Sophia Reynoso single and an overthrow after a Lorenz groundout brought in the remaining Gator runs.