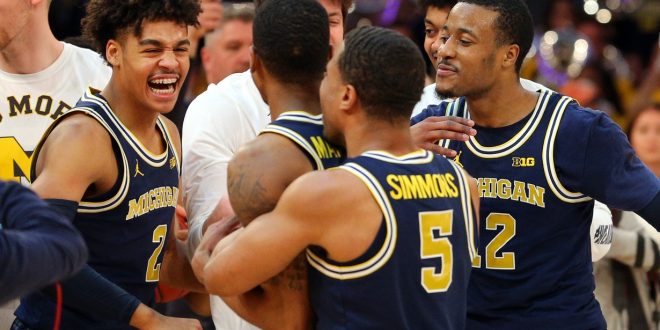 Best matchup in the Sweet 16.

The Sweet 16 will be in full swing Thursday Night especially with a matchup between two hot teams that are coming off big wins. After an impressive buzzer-beating three to beat Houston in the second round, the Michigan Wolverines will face off with vs. the Texas A&M Aggies.

This will be the first time the two teams will be facing off since 1962. Only this time around it will be more of a defensive battle. With Aggies center Tyler Davis running the paint and being a huge asset to A&M’s rebounding game, the Wolverines will have to play a more aggressive game than what they have been playing during this year’s tournament. But even with the size advantage, the Aggies will have to adjust to Michigan’s big men who can spread out the court and shoot the three ball.

With A&M beating one of the tournaments favorite UNC they are not forced to be reckoned with. But on the other side, Michigan has won 11 straight games and have had many good breaks according to coach Beilein from games against Maryland, UCLA and Houston last week. The Wolverines are a team that still has yet to put up a complete game in this tournament but always seem to get hot at the right moment.

Players to Watch and Gameplans.

For Texas A&M, one way they can come off victorious in this matchup is by feeding the ball to Tyler Davis and Robert Williams and have them run the inside paint. Although Admon Glider is a dangerous Shooting Guard and one of the Aggies leading scorer, he won’t get many good looks playing against a top-ranked defense. The key for the Aggies is to defend the outside and feed Davis.

For Michigan, the key for them to win their 12th straight is by playing the outside. The Aggies defense is known for winning the rebounding game. Coach Beilein will have to size up and defend the paint. The Wolverines will also have to trust Charles Matthews more and let him take good looks and set up plays. When playing a defense like A&M the Wolverines will have to take any good look they can get.