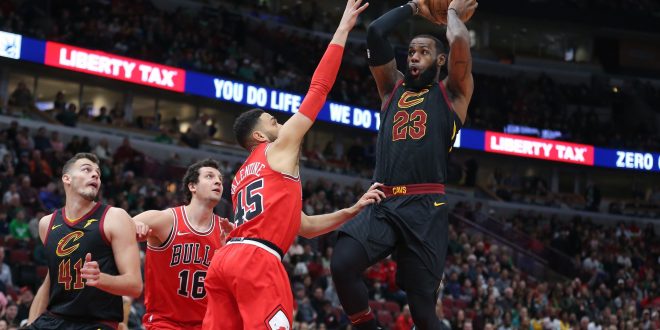 Cleveland Cavaliers Comeback To Defeat the no. 1 Toronto Raptors

Last night, the Cleveland Cavaliers came back to defeat the #1 ranked Toronto Raptors in a devasting fashion. After being down at 15 at the half, the Cavaliers rallied back to defeat the Raptors 132-129. It’s no surprise Lebron James came to play, putting up 35 points and 17 assists. For this game, James had no choice but to put up big numbers if he planned on winning.

The Raptors are currently the no. 3 scoring team in the league and were giving the Cavs a heavy dose of 3-pointers. The Raptors leading scorer Kyle Lowry was 6/9 from the 3-point line and finished with 24 points. What was most shocking in this game, was how Toronto’s bench led by Fred VanVleet ended the first half with a 79- 64 lead at the half.

Going into the half, things weren’t looking good for the Cavs. Leaving the half down by 15 and being torched by the Raptors bench left the Cavs homes fans in shock. Now we could see if the Cavs were built to last. At the start of the 3rd quarter, the Raptors were still hot but the Cavs started to pick up the slack. James started to find more of his rhythm and got fellow all-star Kevin Love, into the mix. The Cavs closed in on the Raptors lead and ended the 3rd quarter down by 1. The Cavs had seemed a lot more aggressive in the second half, keeping a body on each player of the Raptors and closing up lanes to avoid the easy buckets.

The dagger to the heart of the Raptors came in the fourth quarter with a pull away 3 from Kevin Love. The Cavs were in the lead, the score was 124-125 so the game still could’ve gone either way. James rushed into the paint to draw in the Raptors defense and with 29.7 seconds on the clock he kicked it out to Kevin Love that knocked down the three to make the score 128-124.

Lebron James contributes the Cavs come back to their aggressiveness.