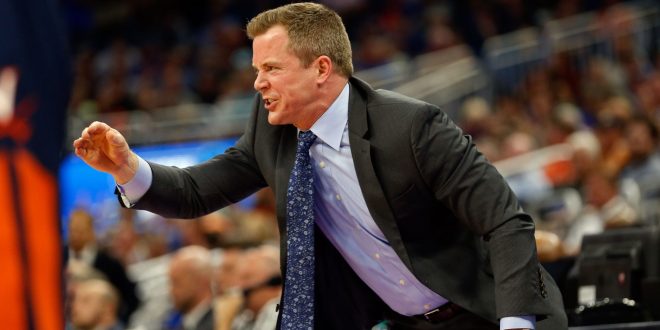 Florida Atlantic has named Dusty May as its new head basketball coach. May takes over for Michael Curry, who coached the Owls to a 39-84 record in four seasons. May’s introductory press conference will be held at 11 a.m. on Friday, March 23.

May has spent the last seven years at Florida Gator head coach Mike White’s side, first meeting White at Louisiana Tech in the 2011-12 season. He served as an assistant coach under White until the 2015-16 season in which White took the head coaching job in Gainesville. May joined White and would serve as the Gator assistant coach for three years.

The UF-FAU connections don’t end there. White’s younger brother, Brian White, serves as the vice president and director of athletics for FAU. He was appointed to the position toward the beginning of the month.

As this is his first head coaching gig, it’s difficult to say whether or not he will find immediate success. Brian White has show confidence in him, however, saying that he was the No. 1 target for the Owls.

As an assistant to White at Louisiana Tech, May helped coach three consecutive conference-winning teams from 2013-15. At Florida, he enjoyed back-to-back NCAA tournament appearances, including an Elite 8 run in the 2016-17 season. Over his three seasons in Gainesville, the Gators boasted a 69-37 record.

The Owls in need of change

FAU’s basketball program has had a rough history. The Owls have not had a positive season since 2010-11, in which they put up a respectable record of 21-11. The Owls’ best finish over the past six years was this season, finishing 12-19. With the Owls already flying low, many fans will consider the move warranted.

Florida in need of new assistant

As a result of May’s move to FAU, the Florida Gators are searching for a new assistant coach to fill the void.

Seems some in UF fanbase want White to hire an assistant with HC experience. Andy Kennedy would fit bill. But don't discount Brett Nelson, Gator ties as a player and a ton of assistant coaching experience, now at Marquette.

Several names are being thrown around, but no significant moves have been made so far.