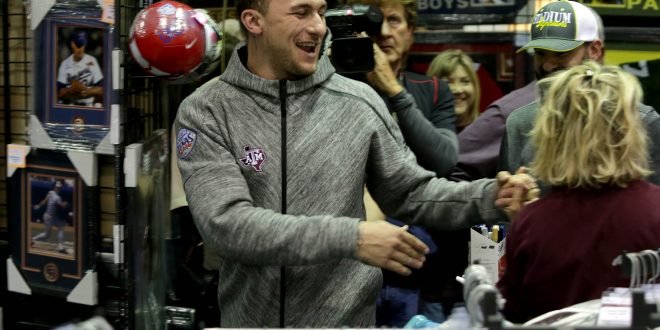 Feb 2, 2017; Katy, TX, USA; Sherry Collins, of Waco, Texas and former Texas A&M quarterback and 2012 Heisman Trophy winner Johnny Manziel have fun talking with each other as Manziel walked out for a portrait session inside Stadium Signatures inside the Katy Mills Mall. Collins was first in line and waited 3 hours to get a picture taken with Manziel and an autograph. Hundreds of Texas A&M fans and alumni paid $99 to have their picture taken with Manziel or the $99 allowed them to get one item autographed by Manziel who is still loved in the state of Texas for many. Mandatory Credit: Eric Seals-USA TODAY Sports

Johnny Manziel Still Wants to Play in the NFL

Johnny Manziel had everything a college quarterback could want.

However, in 2015 he was cut from the team for poor behavior off the field.  Manziel has yet to play another down of NFL football.

Manziel has received offers to play in the CFL, but he wants the NFL and has even offered to play for free.  In a tweet, Manziel said “It’s not about the money it’s about getting back to doing what I miss and love.”

Now that the NFL draft is coming up and colleges are hosting Pro Days, Manziel is expressing his interest to come back to the NFL.

He has been working with George Whitfield, who helped Manziel get drafted back in 2014.

The University of San Diego allowed Manziel to take part in its Pro Day on Thursday.  He threw to the wide receivers and tight ends, which gave him about 35 throws in front of NFL scouts.

Manziel seemed to be happy with how he threw in front of NFL scouts, but the question remains, will a team take a chance on him?

Manziel went to rehab in 2015, then after dismissed domestic charges, he completed anger management class, attend a domestic violence impact panel and participate in the NFL’s substance abuse program.

Recently, he got secretly married, has stayed sober “for a long period of time” and is battling mental health issues.

Where Could Manziel Go?

Here are five teams who could take Manziel this season:

Manziel’s placement depends on what he looks like in The Spring League.  People want to see him play actual football, not just throwing passes to players.

The next few months are extremely crucial for Manziel, so everyone’s eyes will be on him.  Let’s hope this time he learned his lesson and won’t repeat his mistakes.

Nicolette is a senior at the University of Florida who has participated and enjoys reporting on all things related to sports.
Previous Fight for Elite Eight: Texas Tech Battles Purdue
Next Preview: Syracuse vs Duke For Spot in Elite Eight