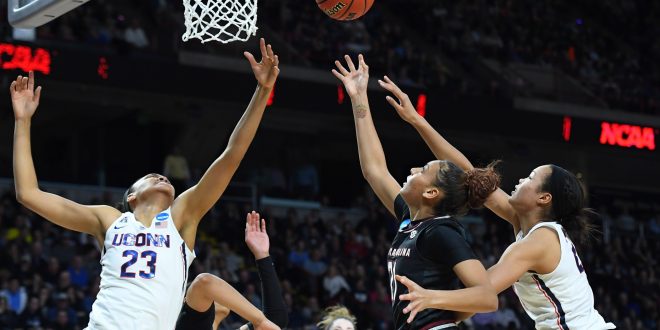 Notre Dame and UConn are each advancing to the NCAA Final Four in women’s basketball.

For just the 4th time in #ncaaW history, all four No. 1 seeds advanced to the #WFinalFour!

The Notre Dame Fighting Irish defeated the Oregon Ducks Monday night 84-74. The Irish will be competing in the Final Four for the eighth time in school history. Senior Kathryn Westbeld scored 20 points for Notre Dame, helping extend their lead throughout the second half. Oregon struggled from outside the arc, hitting just 4 out of 15 shots. Notre Dame’s defense looked sharp, putting a lot of pressure on the Ducks. The Irish opened the second half with a 15-4 run.

The last time Notre Dame played UConn was in 2015. The two met in the NCAA national title game, where UConn won 80-71.

Husky fans, check out the Top 5 Plays from yesterday's win over South Carolina in the Elite 8! pic.twitter.com/IuZFNBcShF

UConn is once again competing in the Final Four after beating South Carolina by a 29-point margin. Monday night’s game ended in the Huskies’ favor with a final score of 94-65. This is the 19th time UConn has reached the Final Four. Strong performances from Gabby Williams and Crystal Dangerfield helped the Huskies take a huge lead over the Gamecocks. Williams ended the game with 23 points, five assists and five rebounds. Dangerfield scored 21 points. South Carolina went just 1 for 7 outside the arc. The largest lead was a 32-point margin.

Notre Dame and UConn will face off Friday night at 9:30.

Born and raised at the ballpark! Typically quiet- until it comes to sports. I'm a South Florida native with a passion for baseball nearly as strong as my faith. Grew up in garnet + gold, turned out sporting orange + blue. Likely to be found with a camera. And yes, I take food pictures.
@victoriarossman
Previous Florida vs Florida State 2nd Game Preview
Next Can Florida get their Quarterback ?