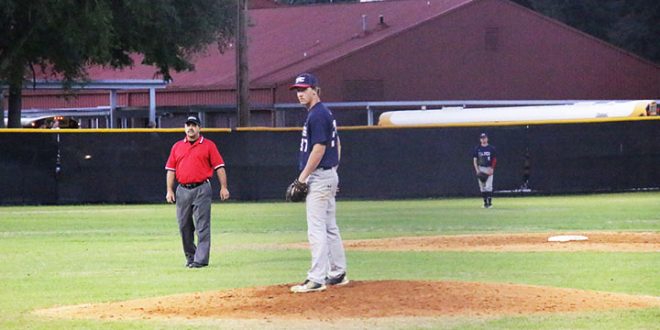 Senior right-handed pitcher Alex Cameron waits at the mound as he prepares to make a pitch. Photo by David Street.

Trinity Catholic’s Jud Fabian, who is a University of Florida commit, got things going at the top of the first inning with a home run to the side, and the Celtics never looked back, defeating the defending 1A state champion Trenton Tigers on their home field 11-5.

The Tigers entered the matchup winning seven of their past eight games. The Celtics entered winning four of their past five. Trenton relied on a powerful offense to get to this point, averaging 7.5 runs per game. The Tigers are above the national average in batting average (.280), on-base percentage (.404), home runs (5) and stolen bases (64). Trenton also rode a very strong pitching staff, which has a 2.62 earned run average. Landon Kennedy has led the way with a 1.09 ERA to go along with five wins and two complete games.

The Celtics themselves had a solid offense entering the game, averaging 5.4 runs per game. They scored a combined 16 runs in two games before the matchup against Trenton. While the Celtics were riding an above average offense, it’s pitching and defense had been subpar, allowing just under four runs per game. On Tuesday, they would not need a lot of pitching as it rode a scorching offense.

Celtics have 8 runs on only 6 hits.

Too little, too late for the Tigers

After Fabian homered to left side, Eddie Lefever added an RBI single in the first inning to make it 2-0 Trinity Catholic. The Celtics eventually built up a 4-0 lead by the second inning. The Tigers eventually made it a one-run game after Trey Sanchez and Chase Malloy scored, but they would stay behind the whole game. The six-run loss was their worst of their season.

Celtics head coach Tommy Bond was pleased with his team’s strong offensive performance. Here’s what he had to say about that.

Trinity Catholic will be in Montverde, Florida to face Montverde Academy tonight at 7. Trenton will stay at home on Friday, March 30 to take on the South Sumter Raiders at 7 p.m.